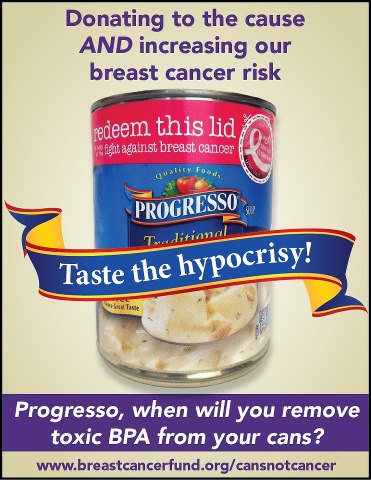 Stop the Hypocrisy! Let Progresso Know that BPA-Lined Cans Are NOT Acceptable

October swamped the market with pink. Some companies had the best intentions in donating funds for breast cancer research, but others seem to have their wires crossed.

Take Progresso Soup, for example. Go to your local grocery store before the month is out and you are likely to find pink ribbons on the cans. These are part of parent company General Mills’ “Save Lids to Save Lives” program, which donates money to breast cancer charities for every lid sent in.

Sounds great, right? So what’s the problem? These cans that we’re buying to supposedly support the fight against breast cancer contain bisphenol-A (BPA), a dangerous chemical linked to estrogen-driven cancers like breast cancer.

Yep. It’s another case of pinkwashing. Marketers selling products to support breast cancer research while including ingredients in the products that are actually linked to cancer. This just won’t do!

BPA is a chemical used to make plastics. Canned food manufacturers use it to line the insides of food cans, where it can make its way into the food itself. In fact, a recent test released by the National Work Group for Safe Markets found that out of 50 cans tested from 19 states and one Canadian province, 90 percent had detectable levels of BPA. Even healthy foods like vegetables and fruits had BPA levels as high as those found to cause harm in animal studies.

BPA can act like female hormones in the body. Scientists have found evidence that the chemical can potentially increase the risk of breast cancer and other estrogen-driven cancers like prostate cancer. A study in 2011, for instance, found that the exposure to chronic, low levels of BPA activated several growth-factor-receptor pathways that have previously been implicated in cancer.

“This is counterintuitive,” stated Sarah Jenkins, Ph.D., lead author of the study, “since BPA in low levels was presumed to be safe.”

In addition, BPA has been found to reduce the effectiveness of chemotherapy by protecting cancer cells! So if you’re going through chemo to battle your breast cancer, and you eat Progresso soup in BPA-lined cans, you may be actually hindering your recovery!

Animal studies have also linked BPA to infertility, developmental problems, and an increased risk of breast cancer later in life. Meanwhile, the Centers for Disease Control and Prevention (CDC) determined through testing that contamination is widespread throughout our population.

For years, we’ve been contaminated with chemicals like BPA without our consent. We never asked for this! Now it’s time for us to turn the tables. We can make a change by choosing exactly where to spend our hard-earned money, and by choosing not to support companies who promote potentially cancer-causing products in an effort to raise money for cancer research.

“It’s pretty ironic that Progresso is raising funds to fight breast cancer while also using a chemical linked to the disease in its cans,” said Gretchen Lee Salter, policy manager at the Breast Cancer Fund. “If Progresso really cares about reducing breast cancer, it should commit to getting rid of BPA and replacing it with a safer alternative.”

Other companies have already created BPA-free cans, or put their soup in BPA-free boxes. It’s time Progresso did the same.

Are you fed up with the hypocritical actions by food manufacturers? Fortunately, it’s easy to make your voice heard.

What do you think of Progresso’s hypocrisy? Please let your voice be heard!