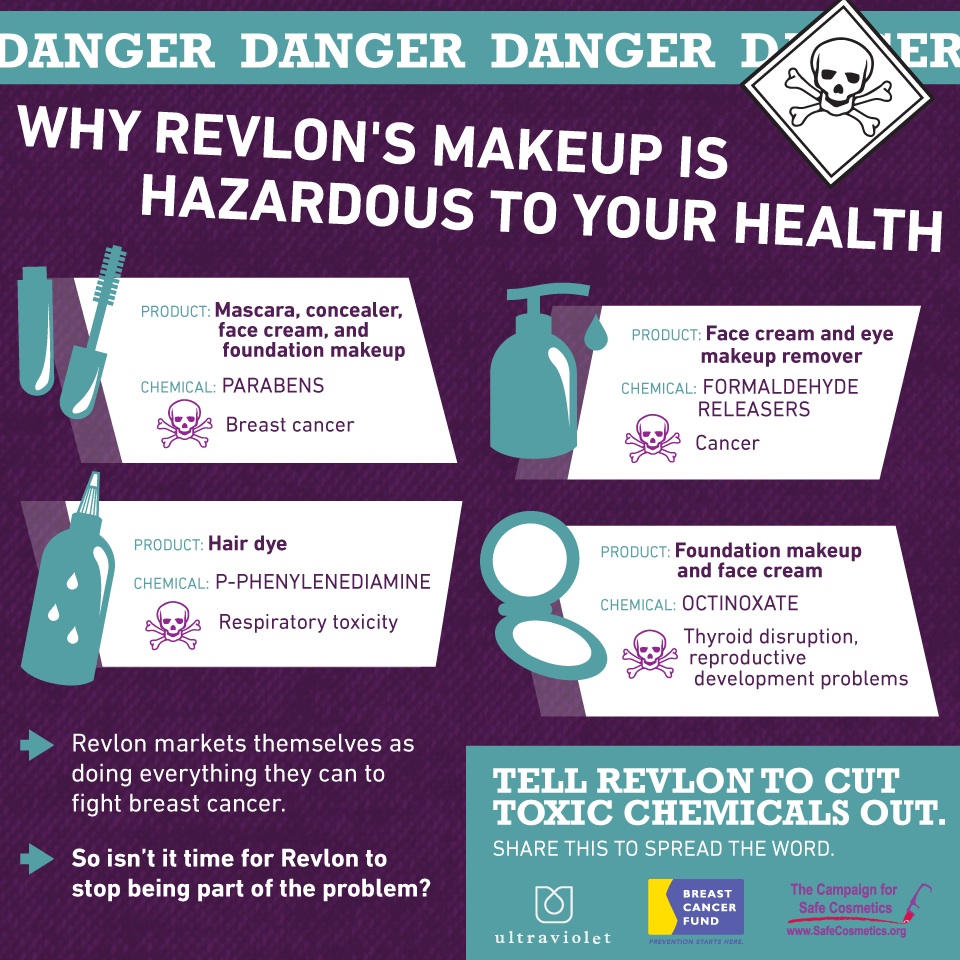 Revlon is getting irritated.

It started when the Campaign for Safe Cosmetics conducted an independent study on a number of Revlon’s cosmetic products. They found a number of potentially harmful chemicals in the formulations.

They decided to do something about it.

Together with the Breast Cancer Fund and Ultraviolet, the Campaign issued a press release and created a petition urging the company to remove toxic chemicals from its products.

Unlike Johnson & Johnson, Proctor & Gamble, Walmart, and Target, Revlon hasn’t made any announcements about reducing chemicals. Instead, it sent a cease-and-desist letter to Ultraviolet and the Breast Cancer Fund, demanding they withdraw their press release concerning Revlon’s chemicals, and issue a retraction.

Specifically, Revlon directed the companies’ attention to this press release. In it, the advocacy groups state that Revlon uses “cancer-causing” ingredients like carbon black and formaldehyde releasers, plus chemicals like parabens, octinoxate, and others linked to hormone disruption and thyroid problems.

They also noted that other cosmetic companies, including Cover Girl, Neutrogena, and Clean & Clear, are removing toxic chemicals from their products in response to pressure from the Campaign for Safe Cosmetics and the Breast Cancer Fund. Why not Revlon?

Revlon responded that the press release was “false and defamatory,” and demanded the companies withdraw it and issue an immediate retraction. They noted their efforts in the fight against cancer, which included funding the science that resulted in the breast cancer drug Herceptin, and “championing the Revlon Run/Walk for Women.

They then stated that the facts in the release are “incorrect,” with the following points:

Revlon: Revlon said the press release wrongly stated that Revlon uses BHA. “We have not used this ingredient for some time,” they say. “BHT is a different and widely used preservative that has not been linked to cancer by any reputable scientific or regulatory body.”

Revlon: Revlon states that though Quaternium-15 may release formaldehyde in “minute quantities” from contact with skin, and that there is no “reputable scientific evidence of cancer caused by formaldehyde.”

Revlon: Revlon says it uses only “short-chain” parabens like methyl, ethyl, and propylparabens, “which are safe,” and that only more complex parabens have been potentially linked to cancer.

Counter argument: Yet in a 2012 study, researchers found methylparaben, among other types, in the breast tissue collected from women who’d had mastectomies because of breast cancer. Researchers did not say these parabens caused the cancer-only that they were found in areas of the breast, but the research raised important questions about how these chemicals may affect women’s health.

Revlon: Revlon states this ingredient is safe, and that any allegation that it disrupts hormones is based on an “unvalidated report to a state authority and has no scientific basis.”

Counter argument: The Skin Deep Database rates this ingredient as a moderate hazard, with links to hormone disruption. In addition, a 2004 animal study published in Toxicology indicated that octinoxate (octyl-methoxycinnamate) showed estrogenic activity, and a 2006 study also found that the chemical also did so when mixed with other sunscreens.

Counter argument: The Breast Cancer Fund noted it was an endocrine disruptor. The Campaign gives it a high hazard rating because of hormone-disrupting concerns. A 2002 study found that resorcinol administered at high doses can disrupt thyroid hormone synthesis and can produce “goitrogenic effects,” though they noted “under real-world conditions” human exposures are not “expected to cause adverse effects on thyroid function.” The World Health Organization notes that, “In humans, exposure to resorcinol has been associated with thyroid effects, CNS [central nervous system] disturbances, and red blood cell changes.” They add that the first two effects have been reported from dermal (skin) application of high concentrations.

Revlon: Revlon notes the press releases statement that this is a “respiratory toxicant,” but says it’s “not inhalable in any product sold to a Revlon consumer.”

Counter argument: The Safe Cosmetics Database rates this as a moderate-to-high hazard because of skin and eye irritation and organ system toxicity. The ingredient, which is used in hair dyes, is also associated with allergic reactions.

Revlon says manufacturers have changed how they process this ingredient, and it is now safe and effective. The press release noted it was linked to cancer.

Revlon concludes that unless the companies act immediately to withdraw the press release and print a retraction, they will be “forced to take more public and legal steps to protect its hard-earned name.”

In my opinion, this is another case of big manufacturers assuming that if they use just a little of a certain toxic ingredient, then certainly it won’t hurt us. Obviously they’re not considering how many of these products we use day after day, time after time, over a number of years. The thing is, we know that many of these ingredients are not good for us, and more importantly, we don’t know what harms they may create when used together in formulations. A recent study, for example, found that when two ingredients in “safe” amounts were mixed together, their combined effect was cancerous.

Besides, why this argument? Why not make your customers happy and use ingredients that actually nourish and feed skin with vitamins, minerals, phytochemicals and other things that it really needs? These potentially harmful chemicals are just not necessary. There are a number of safer and healthier alternatives out there.

I’ll leave it to you to decide what you think of Revlon’s actions.

What do you think of Revlon’s response? Please share your opinions.