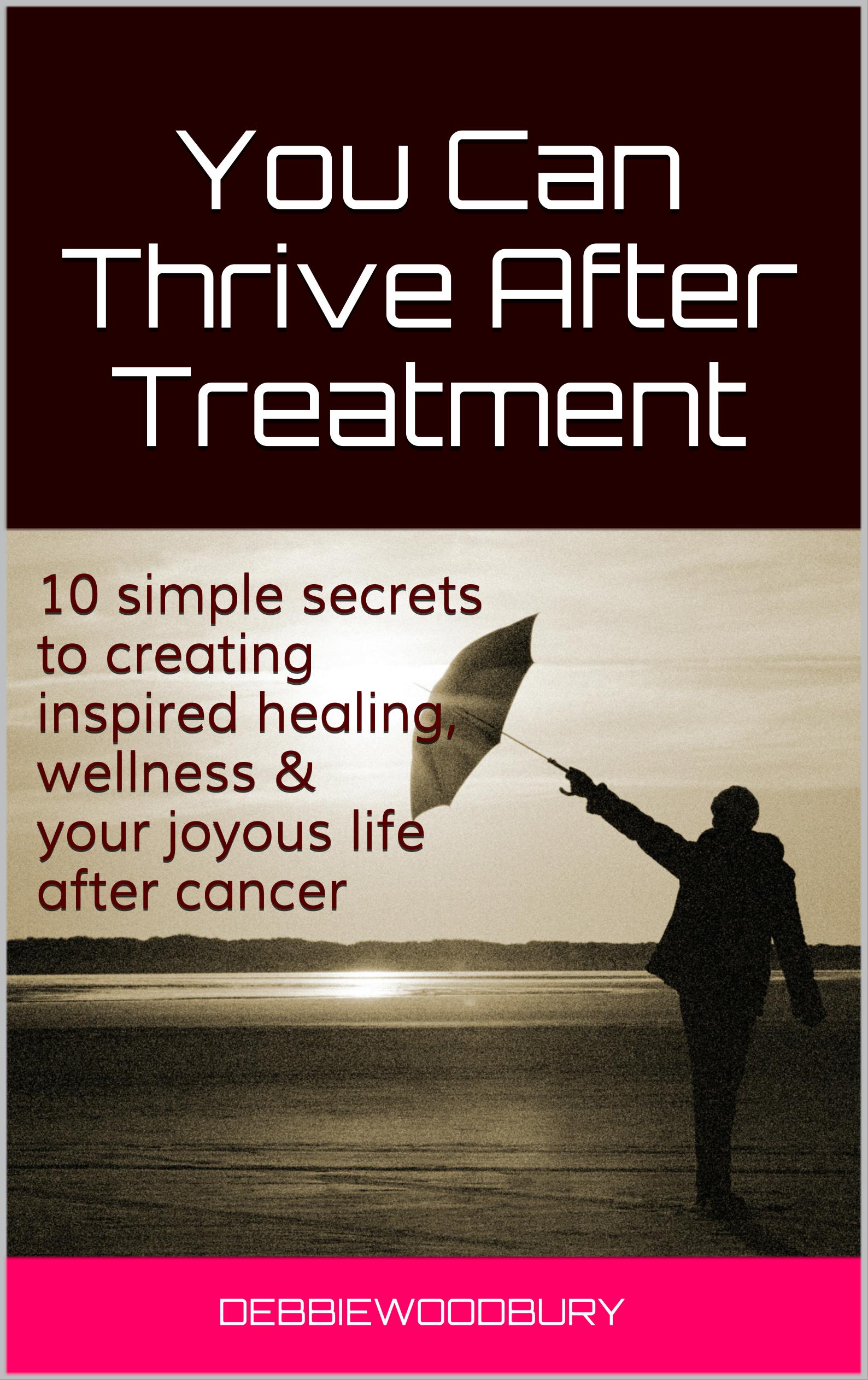 You Can Thrive After Treatment

I’ve talked quite a bit about the challenge of learning to cope once cancer treatments are over. Today, I’d like to introduce you to another survivor who has tackled this subject-retired attorney and interior decorator, Debbie Woodbury.

Debbie was diagnosed with breast cancer in 2009. She went through a mastectomy and breast reconstruction, and though treatments were challenging, she found her biggest struggle waiting for her when it was all over.

Without the proper support, however, Debbie says it was difficult to move on like her friends and family did, which led to a feeling of loneliness. In her new book, You Can Thrive After Treatment, she helps survivors to find the help they need to truly recover and transition into a purposeful life.

Though Debbie talks about surviving cancer, she’s quick to point out that going through treatments was no walk in the park. For her, the numerous tests and re-tests that led to her eventual diagnosis were extremely stressful.

“In 2008, I went for my regular mammogram. I had no lump or anything, but they saw microcalcifications and sent me for a biopsy. It showed possible cancerous activity.”

Debbie had no outward symptoms at the time, and she felt fine. She didn’t have breast cancer in her family, and considered herself a generally healthy person.

“It was a long process getting diagnosed,” she says. “The hardest part was wrapping my mind around it. Being told I needed a mastectomy was shocking. Most people have a lump and they have chemo. I had no lump and I didn’t need chemo, but I still lost a breast.”

It took six months from diagnosis to surgery, during which Debbie struggled to figure out how to deal with her diagnosis. “I didn’t know where I fit in, if I even had cancer in the traditional sense. I had the support of my family and friends, but as every survivor will tell you, they’re not able to give you all the support you need, because they just can’t understand what you’re going through.”

Finding the Support You Need

Despite her challenges, Debbie made it through and found herself done with treatments and set back out into the world away from the cancer center. She was happy it was over, but found herself flooded with unwanted emotions.

“Your family and friends want to move on. It’s all over! They think you’re all done, yet you feel like you’re finally getting a moment to feel.”

Debbie found a miracle in the breast nurse navigator who came to see her at the cancer center. Her job was to provide emotional support and to make Debbie aware of all the other services available to her. “I thought I was leaving and going back home to that black hole,” she says, “where I’d have to deal with everything on my own. She said no, she was there for me anytime I needed to call her. I felt like I was drowning, and she threw me a lifeline.”

Debbie feels extra fortunate to have had that help, as she notes that only two years before, her friend had been in a similar situation at the same hospital, and there was no nurse navigator for her.

“I was very lucky to be there at that time.”

Putting Her Experiences to Work for Others

Debbie was going through a rehabilitative exercise class at the cancer center, and it was the last day. She remembers talking to another woman who was also in the class and was also attending her last day.

Acting on a desire to continue the conversation with other survivors-and to offer the kind of hope to others who didn’t have the support Debbie had found-she decided to put her experiences and what she’d learned into a blog and later, a book.

“Initially it was hard to accept,” she says. “I didn’t really want to think that there was anything good that could come out of me having cancer. But I slowly started to realize I was more grateful for the good things in my life. Giving back was a tremendous part of this. I just wanted to share with people that there are ways to pull yourself out of that black hole we’ve all been in.”

Debbie has ten sections in the book, but she agreed to share with us her top three helpful hints:

The benefits of all the work she’s doing? For Debbie, it’s helped her turn a negative into a positive. “The first time I was able to help someone else going through this disease, I felt for the first time that there was something positive coming out of my cancer experience.”

If you’d like a copy of Debbie’s book, you can get it on Amazon or visit her website, Where We Go Now? for more information.