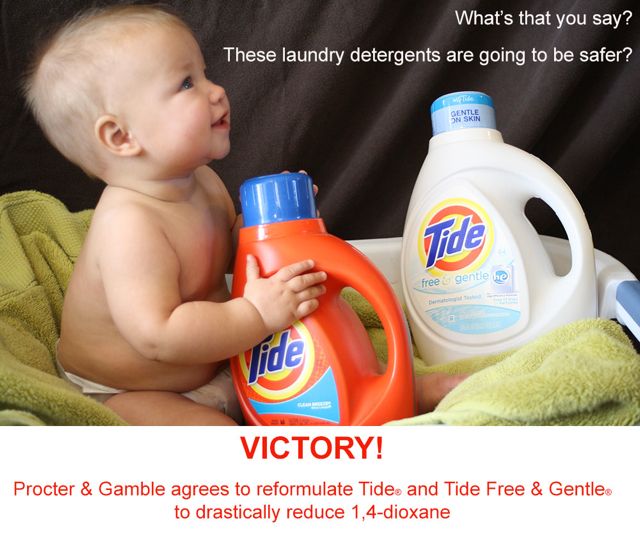 I love it when concerned citizens get together to create change. Today, I’m happy to report that we’ve done it again. We’ve encouraged a large manufacturer to reformulate a product to reduce the level of potentially dangerous toxins.

If you’re a regular Cinco Vidas reader, you may recall that on November 6, 2012, I posted a blog in support of our friends at Women’s Voices for the Earth (WVE).

In the post (entitled, “Tell Tide to Get the Cancer-Causing Ingredients Out“), I explained that WVE was recruiting supporters to put pressure on Tide to change. The popular detergent contains 1,4-dioxane, a chemical by-product that’s a known animal carcinogen and a probable human carcinogen. WVE posted pictures on their website and on a dedicated Facebook page to spread the word that this ingredient is unsafe-particularly for young children.

Now, I’m happy to report that all of our efforts worked. On January 18, 2013, Proctor & Gamble, who makes Tide and Tide Free & Gentle detergents, agreed in a California court to significantly reduce the levels of 1,4-dioxane in its laundry products.

I’ve posted about laundry detergents in the past, and have warned readers that many are full of potentially toxic ingredients that can not only cause allergic reactions and irritated skin, but that may be linked with other health problems. Cleaning agents, buffering agents, stabilizers, fragrances, and more may help your clothes look clean and bright, but they can also cause respiratory and eye irritations, dermatitis, and skin itching and cracking.

I advise people to use safer options, such as fragrance-free detergents and organic products that are made with fewer chemicals. You can also make your own with ingredients like washing soda and baking soda.

Many people find making these types of changes to be challenging, however, and would rather the products they buy in the stores be formulated in a safer way. Often it seems that it’s too difficult, however, to influence the big corporations that are making most of our products today.

According to a new WVE special report, we can make a difference when we work together. After a year’s worth of pressure, Proctor and Gamble has agreed to drastically reduce levels of 1,4-dioxane.

Through independent testing, WVE discovered that Tide contained this dangerous chemical at 89 parts per million in Tide Free & Gentle and 63 ppm in Tide. They emailed the company, started a petition that was signed by over 78,000 people, and created a media buzz about the cancer-causing ingredient in Tide. P&G initially ignored all communications, but eventually issued a press release stating that levels of 1,4-dioxane in Tide were safe.

WVE didn’t give up, and posted pictures of Baby Emma on their website and on Facebook-the same picture I used on my Cinco Vidas post. A wave of concerned consumers passed the images around, alerting more and more people to the issue.

As awareness increased, an Oakland-based nonprofit organization called “As You Sow” filed a lawsuit against Proctor & Gamble for violating levels of 1,4-dioxane in their detergents without a warning label under Proposition 65, the California state law governing toxic chemical exposure in consumer products.

In early January, a Superior Court Judge signed the consent judgment on the case, resolving As You Sow’s claims against P&G. In the consent judgment, the company agreed to reformulate its detergents to reduce levels of 1,4-dioxane to below 25 ppm. The reformulation process is to be completed by September 2013.

This victory comes on the heels of Johnson & Johnson’s announcement in August 2012 to remove potentially harmful chemicals like formaldehyde, 1,4-dioxane, and phthalates from all their consumer products by 2015.

Change is in the air. Finally, big business is getting the message that we don’t just want our products to work-we want them to be safe to use. We can celebrate this victory, and use it as motivation to keep going. Who knows what we may be able to accomplish together?

Look for more about this Tide victory on WVE’s website and on their video report.