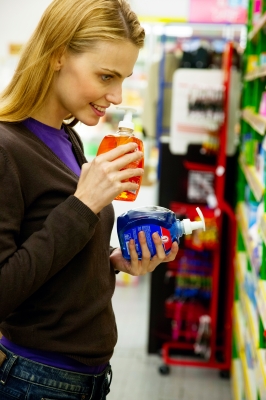 Walmart Pledges to Go Eco-Friendly with Household Cleaners, and Reduce 10 Chemicals from Cosmetics

Change is happening in the industry. It’s happening slowly, but it’s happening! In 2012, Johnson & Johnson (J&J)-makers of products like Neutrogena, Aveeno, and ROC-pledged they planned to remove a list of potentially harmful chemicals like formaldehyde from all their consumer products by the end of 2015. In January 2013, Proctor & Gamble, who makes Tide and Tide Free & Gentle detergents, agreed in a California court to reduce the levels of 1,4-dioxane in its laundry products. Now, in a move that’s shocking the industry but causing all of us here at Cinco Vidas to jump for joy, Walmart has announced its plans to cut down or eliminate 10 chemicals found in household and beauty products currently on their shelves.

In a recent announcement, Walmart stated that starting January 2014, it would begin to monitor progress on reducing 10 hazardous chemicals from the fragrances, cosmetics, personal care products, and household cleaners. It also plans to apply to its own brand of cleaning products the Environmental Protection Agency’s (EPA’s) Design for the Environment label, which identifies eco-friendly goods. By January 2015, suppliers with products in Walmart stores will be required to clearly print ingredients on labels as well as list them for online sales. Which chemicals are we talking about here? The nation’s largest retailer didn’t say, stating it wanted time to let suppliers know about the change before revealing any more to the press. They did note that they picked “high-priority” chemicals based on the extent of their impact and on the availability of safe and affordable alternatives, and added that all ten are considered to be toxic by the EPA. The chain doesn’t intend to ban any of its suppliers that may use these chemicals, but rather, to work with them in a collaborative effort to create cleaner products.

Though this is only a single step toward making safer, more eco-friendly products readily available for all Americans, it’s a huge step. Because Walmart has such a huge presence in the country, such a move is bound to influence other companies to make changes. Co-founder of the Campaign for Safe Cosmetics and advocate for clean cosmetics Stacy Malkan noted it was a significant step forward, and that because of its market dominance, Walmart could shift the whole industry. Already, we’ve seen more response from corporations in the industry than we have seen from government. As far back as 2007, Target and the parent company of Sears and Kmart announced plans to join Walmart in phasing out polyvinyl chloride (PVC) from products. Since then, in addition to the announcements from J&J and Proctor &Gamble, Kroger phased out BPA in cash register receipts in 2011. In 2012, they added that their Simple Truth cleaning products would be free of 101 chemicals and potentially hazardous ingredients. Over and over again we’re seeing the evidence that proves our voices matter. If you’re wondering how you can contribute to change, simply use your purchasing dollars to buy from those companies who are careful about the ingredients they use. If we all get together and do this regularly, the companies using chemicals will have to make a change. What do you think about Walmart’s announcement? Please share your thoughts.