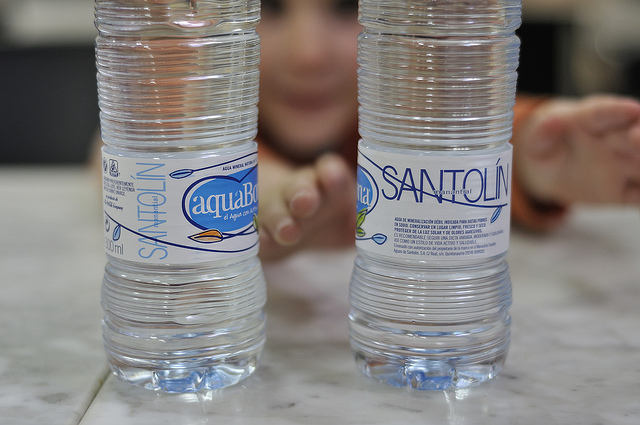 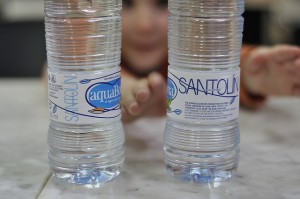 Seems we’re surrounded by plastics everywhere, doesn’t it? From plastic cups to baby utensils to containers for personal care products, most of us would be hard pressed to get plastic completely out of our lives.

Fortunately, we don’t have to. The truth is that according to scientific research, some plastics are safer than others. After doing some research, here’s what I found.

What Are the Different Types of Plastics?

Here they are, with their recycling numbers-you’ll find these usually on the bottom of the cup, bottle, or other container.

PET or PETE (polyethylene terephthalate): Used to make bottles for water, sports drinks, ketchup, personal care products and mouthwash; as well as jars to hold peanut butter and jelly.
Safety-Good: Not known to leach any harmful chemicals. Considered safe, but it is best to avoid heating and freezing. Some studies show that temperature changes may cause these plastics to leach chemicals into foods and beverages.
Recycle #1: Easy to recycle. Picked up through most curbside recycling programs.

HDPE (high density polyethylene): Used to make bottles for milk, water, juice, bleach, detergent, and shampoo, as well as tubs for yogurt and margarine, grocery and trash bags, and cereal box liners.
Safety-Good: Not known to leach any harmful chemicals.
Recycle #2: Picked up through most curbside recycling programs, though some allow only those containers with necks.

PP (polypropylene): Used to make bottles for ketchup, yogurt, syrup, and margarine; also for straws and medicine bottles.
Safety-Okay: Not considered as safe as #2, but not known to leach any harmful chemical toxins.
Recycling #5: Recycled only through some curbside programs. Becoming more accepted in recycling programs.

PS (polystyrene): Used to create foam insulation and Styrofoam cups and carry-out containers; also used in egg cartons and compact disc cases.
Safety-Bad: Polyestrene can leach toxins into foods. Styrene recently added to the government’s list of compounds anticipated to cause cancer.
Recycling #6: Not usually recycled, but some programs will accept.

Other (typically polycarbonate and miscellaneous): Used to make baby bottles and eating utensils; also for sunglasses, DVDs, iPod and computer cases.
Safety-Usually Bad: Several plastic resins exist in this category, but the main one-polycarbonate-has shown in studies to leach potential hormone disruptors into food. This is the plastic that’s made with biphenyl-A (BPA) that has the FDA concerned.
Recycle #7: Not typically recycled, though some programs may accept.

Which plastics are safe for use?

Those plastics considered safe according to current scientific research include:

Which ones may potentially leach BPA?

Remember, however, that not all plastics with the #7 are polycarbonate. Some plastics actually made from plants are in this category. But to be safe, avoid #7 for now.

Can I use any of these to cook in the microwave?

I’d recommend that you use glass or ceramic instead. For foods that you “steam in a bag,” I’d also recommend you remove them and put them in another container before cooking.

As I mentioned in a former post, styrene was just added to the government’s list of compounds anticipated to cause cancer. Though cups are likely to leach only small amounts, I would choose ceramic and stainless steel mugs instead.

What if my child chews on his sippy cup or straw?

Sippy cups are typically made with #5 plastic, considered safe, but if it were my child, I would remove the cup or straw once he or she has finished drinking.

Do you have any more tips to add on using safe plastics? Please share.