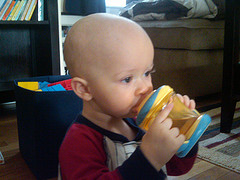 We talked in a former post about the dangers of BPA-a chemical used to make plastics. Recently, it’s been linked to breast cancer (because of its ability to mimic female hormones) and to prostate cancer. Then the National Institutes of Health found something even more alarming-that BPA could have adverse affects on childhood development.

“…there is some concern for neural and behavioral effects in fetuses, infants, and children at current human exposures,” they said.

How are young children exposed to BPA? Mostly through bottles, sippy cups, and formula cans that contain it. Studies in lab animals suggest the chemical may increase the risk of developmental problems in fetuses and young children, along with other ill effects. As a result, the FDA has acknowledged just this month (January, 2010) that it’s going to take a closer look, though it’s going to wait for more studies before considering any changes in regulation.

“We have some concern, which leads us to recommend reasonable steps the public can take to reduce exposure to BPA,” said Joshua Sharfstein, FDA’s deputy commissioner.

It’s a subtle change in stance, as in 2008 the agency’s position was that BPA is safe. They still haven’t told parents to throw out old bottles, but according to Liz Szabo writing for “USA Today,” apparently they are encouraging manufacturers to stop making baby-feeding products that contain BPA. The agency also plans to help find safer materials to line the cans of liquid baby formula.

If further studies do show definitive evidence of harm, Sharfstein said the agency is looking into ways they may be able to regulate BPA. Meanwhile, the National Institutes of Health is investing $30 million in research that should be completed in two years.

While some feel the subtle change is a step in the right direction, others are frustrated that the FDA hasn’t done more. The Natural Resources Defense Council and the American Chemistry Council feel the FDA announcement does little but confuse parents. After all, Canada has banned BPA in baby bottles. Connecticut, too, has banned the chemical from infant formula and baby-food cans and jars. Meanwhile, according to the Centers for Disease Control and Prevention, over 90 percent of the U.S. population has traces of BPA in its urine.

Whatever the FDA decides to do, you can take steps now to protect yourself and your family from additional BPA exposure. The National Toxicology Program suggests the following:

Have you switched to BPA-free baby bottles and cups? Do you have other tips for avoiding this chemical? Let us know.