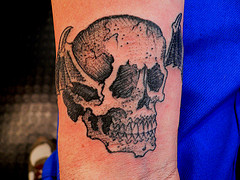 Is tattoo ink a hazardous material? According to a 2004 lawsuit, it is. That year, the American Environmental Safety Institute (AESI) filed a lawsuit against Huck Spaulding Enterprises and nine other tattoo ink pigment manufacturers, distributors, and sellers, claiming that they failed to warn California residents about exposure to hazardous materials. AESI’s research found that the amount of ink needed for a medium-sized tattoo could contain between 1–23 micrograms of lead, more than the 0.5 microgram-per-day recommended limit.

How safe are tattoos? Is there anyone watching out for our health?

A 2006 study done by the Journal of American Academy of Dermatology showed that 1 in 4 Americans between 18 and 50 years old are tattooed. The Food and Drug Administration (FDA) so far hasn’t regulated tattoo inks, so manufacturers aren’t required to list what’s in them. The American Academy of Dermatology (AAD), however, says that inks can contain aluminum, copper, iron, sulfur, titanium dioxide, barium, nickel, cobalt, chromium, and more. As a result of the AESI/Huck Spaulding lawsuit, the Los Angeles Superior Court Judge Irving Feffer required ink manufacturers to place a warning on their labels, saying, “tattoo inks and pigments contain many heavy metals, including lead, arsenic, and others. All of these heavy metals have been scientifically determined by the state of California to cause cancer or birth defects…”

Laser removal can trigger even more chemical reactions that generate carcinogenic by-products that the body must absorb. According to the U.S. News and World Report, German scientists showed that concentrations of toxins in tattoo inks increased up to 70-fold after laser irradiation. Even more concerning: Animal research found that pigment in ink penetrates the skin barrier and makes its way to the lymph nodes.

The Mayo Clinic warns that tattoos can also increase your risk of blood-borne diseases like HIV, hepatitis B, and tetanus (if the tattoo equipment is contaminated); skin disorders and excessive scarring (if the body reacts to the tattoo ink); allergic reactions, leading to swelling, irritation, or itching, which can occur even years after you get the tattoo; and antibiotic-resistant skin infections (if the tattoo artist doesn’t control for infection).

If you’re thinking about a tattoo and are willing to risk the health complications, take some precautions. Choose the facility carefully. Make sure it’s licensed and extremely clean. Find one that will let you watch them open new tubs of ink and packs of needles so you’re sure they haven’t been used previously. Make sure they have an “autoclave,” a heat sterilization machine that sterilizes all nondisposable equipment. Choose a small tattoo with limited colors that’s easier to remove if you change your mind, and get it in a place that you can conceal if you want to. Make sure your technician wears gloves and follows infection-control procedures. Finally, if you get an infection afterwards, see your skin doctor immediately.

Have you had a negative experience with tattoos? Please share.