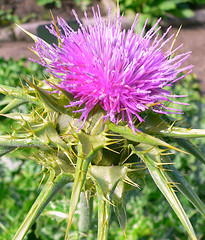 It grows wild in a lot of locations. Many people think of it as a pest encroaching on their yards and gardens. Allergic reactions to its spiny thorns can be serious. But hiding inside this spiky plant is a substance that may help treat inflammation of the liver in cancer patients going through chemotherapy.

The liver works as an efficient processor of toxins in your blood; a “purifier,” so to speak, that sends clean blood back into your system, and toxins out through bile or urine. Unfortunately, some chemotherapy drugs-because they are, in essence, toxins that the liver struggles to get rid of-can overly stress the liver and cause damage (called “hepatoxicity”). In other words, toxins accumulate in the body faster than the liver can process them, and it breaks down-forcing patients to delay or stop their chemotherapy treatments.

A recent study showed, however, that children with acute lymphoblastic leukemia (ALL) who had evidence of liver inflammation, reduced that inflammation with milk thistle. Not only did this benefit the liver, but it enabled more patients to continue their chemo treatments without delay.

“Milk thistle needs to be studied further to see how effective it is for a longer course of treatment,” said co-researcher Kara Kelly, MD, “and whether it works well in reducing liver inflammation in other types of cancers and with other types of chemotherapy.”

Milk thistle-a member of the daisy family-grows in Europe, North American, South America, and Australia. The herbal remedy is made from the seed (actually the fruit of the plant), which contains antioxidants. It has a reputation thousands of years old for helping to restore the liver, and was recommended to treat malaria, the plague, and other illnesses. It was also thought to help reduce the effects of toxins like poisonous mushrooms and alcohol on the liver. Only recently, however, have scientists started looking at its ability to help treat illnesses, although the German Commission E (regulatory agency for herbs) has already approved it as a treatment for toxic liver disease.

This study on children with ALL is only one of several that have used “silymarin”-an antioxidant from the milk thistle seed. According to The American Cancer Society (ACS), lab tests show improvement in liver function, and early studies in test tubes and lab animals show that silymarin may help with cancer prevention and treatment. However, more research needs to be done.

If you want to try milk thistle, or silymarin, check with your doctor. According to the ACS, it’s considered safe, but has the potential to block some of the cancer-killing effects of chemotherapy and radiation. The University of Maryland Medical Center recommends 280-450 mg per day, or 100-200 mg of silymarin-phosphatidycholine complex two times per day. (The latter is thought to absorb better.) If you experience symptoms like jaundice, fever, abdominal pain, severe fatigue or nausea, bleeding that doesn’t stop after a few minutes, or any unusual swelling in the feet and legs, check with your doctor, as these could be symptoms of liver damage.

Have you gone through liver changes as a result of chemotherapy treatments? Please share your story.