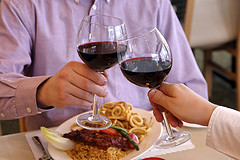 Going through radiation therapy for breast cancer? How about a glass of red wine to toast your strength and courage? According to Italian researchers, in the August issue of the International Journal of Radiation Oncology Biology Physics, it may help reduce the skin damage often caused by radiation.

As you may know, radiation can often leave the skin red, irritated, and burned. Sometimes the wounds take several weeks to heal. Most current medications that help prevent skin problems can also reduce the effectiveness of radiation.

So researchers at the Catholic University and the National Research Council in Italy wondered if the antioxidants found in red wine might help. Out of about 350 women, those who drank wine on treatment days had lower rates of skin toxicity than those who didn’t. In fact, the toxicity effects were reduced up to 75 percent. (Wow!) The best news? The patients didn’t have to drink too much-just one glass in those who received the most benefit-and the wine didn’t reduce the effectiveness of the radiation therapy.

We’ve already talked about the health benefits of red wine’s resveratrol-a potent antioxidant-in another post. And this isn’t the first time that red wine has been found to be beneficial in combination with radiation therapy. Other studies by University of Rochester scientists found that red wine makes cancer cells more susceptible to radiation therapy, and normal cells more resistant. For instance, when pancreatic cancer cells-typically highly resistant to chemotherapy-were pre-treated with resveratrol, then irradiated, the combination induced “apoptosis,” a particular kind of cell death that is usually the goal of cancer treatment.

“If wine can prevent radiation-induced toxicity without affecting antitumor efficacy,” said Italian-study author Dr. Vincenzo Valentini, “it also has the potential to enhance the therapeutic benefits in cancer patients without increasing their risk of serious adverse effects.”

If you’d like to try red wine on your treatment days, ask your doctor. Another option might be to consume red or purple grape juice, which also contains antioxidants from grapes (including resveratrol). You may also consider resveratrol supplements, preferably in liquid or juice form since the antioxidant is best absorbed by the lining of the mouth.

Have you found red wine to help with cancer therapy? Please share your story.