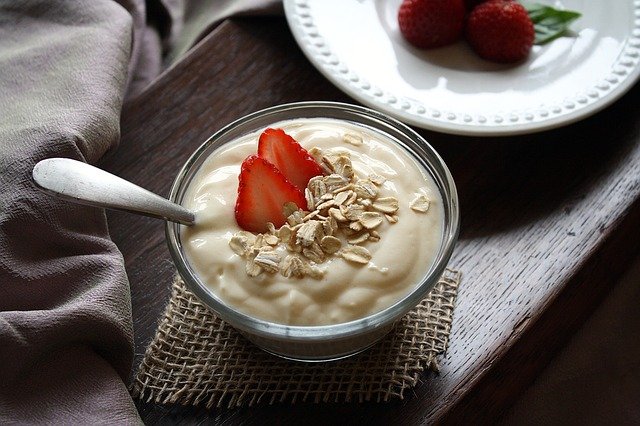 Probiotics: For Your Tummy, Brain, and Radiant Skin!

There are those yogurt commercials, and then all those supplements available at the pharmacy. You’ve heard they’re good for you, but what are they, exactly, and should you be trying to get more in your diet?

I think you should, and here’s why.

Probiotics are a type of “good” bacteria believed to have health benefits. The World Health Organization (WHO) describes them as “live microorganisms which when administered in adequate amounts confer a health benefit on the host.”

Sounds kind of “ew,” but bear with me here. These bacteria are found in foods, mainly fermented foods like yogurt, sauerkraut, kefir, and the like. There are a number of different kinds, but the most common ones we see today are called Lactobacillus and Bifidobacterium.

We are just starting to learn about how these organisms benefit our health, but so far we know that they can help in a number of ways

Our Intestines Are Home to Trillions of Little Life Forms

It may not be the most pleasant thing to think about, but your gut is home to trillions of bacteria. Some are bad for you, but most are either neutral or good for you. The good ones fight off the bad ones, boost immunity, help you digest food and absorb nutrients, and may even have anticancer effects.

There’s been a renewed interest in probiotics over the last decade or so mostly because of antibiotics. You may have heard that taking antibiotics can mess up your digestive system. They kill bacteria, which is good if you have an infection and need to get rid of the bacteria that are causing it, but antibiotics aren’t able to discriminate between bad and good, so they destroy the good bacteria in your gut at the same time.

Researchers have also found that when good bacteria are destroyed, the immune and the digestive systems take a hit. So the idea of replacing those good bacteria became a popular one, especially as more studies found that it seemed to be beneficial.

One of the problems you may have experienced is what’s called “antibiotic diarrhea”-where you suffer diarrhea as a result of taking antibiotics. Studies have found that probiotics are useful in treating infectious, antibiotic, and traveler’s diarrhea. One study even found that they were safe and effective for children with infectious diarrhea.

Some studies have also found that probiotics may help soothe the symptoms of irritable bowel syndrome (IBS), ulcerative colitis, and constipation. Indeed, most of the studies we have so far are on probiotics and digestive issues, and healthcare experts now regularly recommend that people who struggle with symptoms like gas, bloating, diarrhea, and constipation either eat more probiotic-rich foods, or try quality supplements.

Probiotics may help protect health in other ways, too, but we need more studies to be sure. So far, we have evidence that they may:

What About Probiotics and Skin?

The American Academy of Dermatology (AAD) reported in 2014 that they were “encouraged by early research showing a link between probiotics use and clearer skin in acne and rosacea patients.”

Really? Could the solution to your problem skin lie in your yogurt or miso soup?

Perhaps! We have some research showing that those with acne and rosacea who consumed probiotics daily experienced improvements in their skin.

If you needed more proof that what we eat affects the skin, this is it!

You may have even seen some topical products out there with probiotics in them. Do they work? Again, we’re not sure, and it all depends on the unique formulation, but the AAD says that topical probiotics can interfere with the ability of bad bacteria to form acne, and protect the skin from flare-ups and outbreaks.

Probiotics naturally kill bad bacteria, which is what causes acne, so it makes sense that they may help keep skin clear. They also help prevent inflammation, which is why they may prove helpful in those with rosacea and perhaps psoriasis, as well.

Finally, the AAD says that consuming more probiotics internally can influence the skin through what they call the “gut-brain-skin” axis. A shift in gut bacteria, for instance, caused by stress or unhealthy foods, can slow digestion and lead to systemic inflammation, causing acne and redness flare-ups. Healthy bacteria (probiotics) can help prevent inflammation, ease digestion, and thereby reduce the risk of flare-ups.

In fact, probiotics may even go so far as to help boost collagen and protect skin from premature aging. Early animal studies have shown that probiotic supplements protected skin from UV damage.

Where to Get Probiotics

Considering all these benefits, you may want to get your hands on probiotics (if you haven’t already).

The best food sources are:

If you’re thinking about supplements, be cautious. So far, researchers aren’t sure if they’re effective, and we don’t know which combination is best. Talk to your doctor for recommendations. If you do decide to try them, realize that they may cause some side effects to begin with, like bloating, flatulence, and diarrhea.

Do you consume probiotics to protect your skin and health?