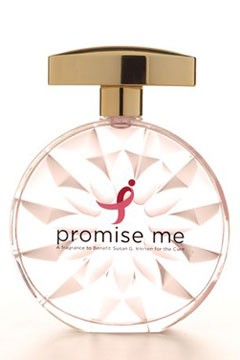 More Chemicals Than I Thought in Komen's New Perfume, "Promise Me" 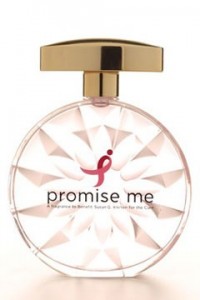 I was recently contacted by a representative from Breast Cancer Action, a grassroots education and advocacy organization located in San Francisco that serves as a watchdog agency for the breast cancer movement. BCAction launched “Think Before You Pink” in 2002 to call for more accountability by companies that take part in breast cancer fundraising.

Their representative wanted my help in spreading the word about “Promise Me,” the pink perfume released earlier this year by Susan G. Komen for the Cure, the nation’s largest breast cancer foundation. The bottle has a pink glow and a pink ribbon, but as I mentioned before, it also has several potentially harmful chemicals, including synthetic fragrance, benzyl salicylate, and oxybenzone.

More Chemicals Than We Thought

BCAction contacted Komen about theses results, asking them to pull the product from the shelves. They didn’t agree to do that, stating that their research concluded the product did not elevate risk of breast cancer in humans, but they did agree to reformulate to “remove any doubt about the ingredients.” The original perfume has been discontinued, and a new one is due out in early 2012. Bottles of the old one are still available for sale, however.

Whether or not the new perfume will be safer than the old, we don’t know. The problem is that some of these questionable ingredients are still used by companies because they believe that the small amounts present in the formulation present no danger. That may be true, but we’re lacking studies on the cumulative results of daily exposure, and that’s what concerns me. Studies have shown these ingredients can remain in our bodies for unknown periods of time. Why take the risk? Why include these ingredients in a product specifically made for those who’ve been touched by breast cancer and are potentially even more susceptible to harm from toxic exposure?

You can help me do something about it by joining BCAction’s “Raise a Stink!” movement to urge Komen to immediately recall Promise Me, and to pledge to prevent pinkwashing in the future. Go to BCAction’s “Take Action” center and add your letter to those that have already been sent on this issue.

Together, our voices are powerful!

Did you participate in BCAction’s “Take Action” campaign? Please share your thoughts.