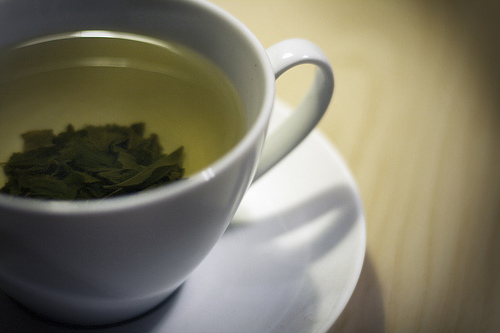 Green Tea and Mushrooms: A Winning Duo Against Breast Cancer

Meanwhile, the simple little mushroom has been breathing down green tea’s neck. An excellent source of many nutrients including potassium, riboflavin, niacin, and selenium, mushrooms are showing powerful antioxidant activity, as well as heart-protective and cancer-fighting properties. The fresh button mushrooms-the ones we commonly use on our salads and in our stir-frys-have shown in studies to reduce the risk of breast cancer and prostate cancer, and to decrease tumor size. The ABM mushroom from Brazil is a potent immune booster, and the three mush-a-teers (maitake, shiitake, and reishi) have been shown to ward off viruses, reduce inflammation, and help detoxify the body in addition to their cancer-fighting abilities.

You may have already known about all this, but here’s something new: a recent study showed that when these two are used together, the effect is greater than either one alone. Like Batman and Robin or Starsky and Hutch, green tea and mushrooms pack a powerful dual punch against the bad guys-at the cellular level. An Australian study proves it, having followed the diets of over 2,000 Chinese women, half of whom had breast cancer. The results showed that those who ate mushrooms and drank green tea significantly cut their risk of breast cancer, and if they did develop the disease, the dynamic duo helped them reduce the severity of it.

Eating as little as 10 grams a day of mushrooms can have beneficial effects. Women who ate the most were around two-thirds less likely to develop breast cancer. We couldn’t find information on the amount of green tea consumed by the women in this study, but you can pile up on this one. Some studies have shown better health effects for people who drank up to ten cups a day as opposed to those who had only three, but others have found equally impressive benefits (fewer recurrences of breast cancer, for instance) in those who drank five cups.

Have any great mushroom recipes? A special way you enjoy your green tea? Tell us about it!