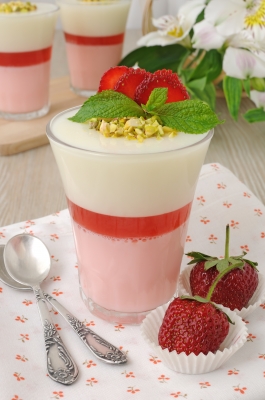 Food Additive in Your Yogurt Linked to Cancer

There are a number of food additives you may want to avoid because they could potentially harm your health. Artificial colorings, some preservatives like BHT, plasticizers like BPA, and the like are linked to things like hormone disruption, cancer, and hypersensitivity in children.

Some food additives, however, are not so clear-cut. Take carrageenan, for instance. Is this ingredient something you should avoid, too?

What confuses a lot of people is that carrageenan is extracted from red seaweed, which is commonly known as “Irish moss.” Seaweed is supposed to be good for you, right?

Used as a thickener and emulsifier, carrageenan is used in creamy foods like ice cream, chocolate milk, yogurt, cottage cheese, soymilk, and other similar items. There are two main types:

What are the Concerns?

The concerns with this ingredient started about a decade ago when scientists reported that some degraded forms of carrageenan (not the kind used in food) had been linked to ulcerations and cancers of the gastrointestinal tract in animal studies.

A prominent researcher in the field, Joanne K. Tobacman, M.D., now associate professor of the University of Illinois College of Medicine, conducted a number of studies on the type of carrageenan that is used in foods. She ended up publishing 18 peer-reviewed studies on the additive, and has concluded that it is not good for human health. In April 2012, she addressed the National Organic Standards Board and urged reconsideration on the use of carrageenan in organic foods.

According to the University of California, Berkeley, several lab studies (mostly Tobacman’s) have shown that both food grade and degraded carrageenan can cause inflammation and increased cell death in human colon cells. Since these results came from animal studies, however, some scientists dispute the findings, saying they might not hold up in human studies, which are so far lacking.

In 2008, Dr. Tacobman filed a citizen petition with the FDA, presenting the results of her studies, but the FDA rejected the petition, disagreeing with Tacobman that the studies indicated the additive was dangerous for humans.

Other experts disagree, however. Europe has already banned carrageenan in infant formula. On March 15, 2013, the Cornucopia Institute sent a letter to the FDA, requesting the agency reconsider their decision on Dr. Tobacman’s petition to remove carrageenan from the agency’s list of approved food additives.

So far, however, it remains up to consumers to protect themselves from this potentially harmful additive. Try these tips:

Do you try to avoid carrageenan? Please share your thoughts.