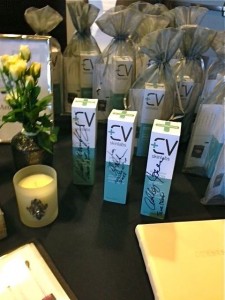 From September 19-20, 2013, CV Skinlabs was part of the invitation-only party at Kari Feinstein’s Emmy Award Style Lounge, located at the chic Andaz Hotel on Sunset Boulevard. During those few days, I had the pleasure of talking with over 70 different celebrities about the work we’re doing to reduce toxic exposure and provide people everywhere with luxurious, soothing and non-toxic skin care products.

This was a huge event for us at CV Skinlabs, and I wanted to share with all my readers some of the connections I made while in Hollywood. One thing that surprised me-a lot of celebrities are not aware of the potentially harmful chemicals they are applying to their skin every day. That gave me a great opportunity to spread the word!

I was also so touched to hear how many people have lost loved ones to cancer, or are struggling with the disease right now. Cancer truly levels the field, and it doesn’t care who you are or how famous you are. Read more about these stories below.

First, however, I want to send a huge thank you  to lifestyle and health coach Christine Campbell of Glamorously Healthy, who joined me at the CV Skinlabs gifting suite. Thanks, Christine! (Shown here with me on the left.)

Model Nicole Murphy of Hollywood Exes (shown here at the right) shared that she, lost her father and her step father to cancer.

Actor Michael Harney, who is starring in the new hit show, Orange is the New Black, and has a long career starring in such shows as Erin Brockovich and NYPD Blue, among many others, talked about taking tragedy in our lives and turning it around into something that can help others. This was a true human-to-human connection and what life is all about to me-serving and inspiring others to do the same!

Michael was kind enough to give me a shout out on Twitter after the event.

Actor Jonathan Bennett, who’s played in Mean Girls, All My Children, and The Glades, (shown here with me on the left), told me his father had just finished his last radiation treatment on September 20, 2013. He showed me a picture of his dad at the hospital just days before. I really felt for him, so I gave him some of our CV products for his dad. These included the Rescue + Relief Spray, which is great for cooling radiation burns-and doubles as a great aftershave. (Now he can ditch his conventional chemical-laden brand).

I was really excited, too, when A.J. Buckley, of CSI New York, Supernatural, and others, came by our booth. His beautiful wife, who is expecting, is an oncologist nurse. I mean, what are the odds? She and I chatted quite a bit about the difficulties patients experience when going through cancer treatments, and how they really need products like CV Skinlabs that are made without harmful chemicals, yet provide nourishing, soothing protection.

How CV Skinlabs Got the Glow On Celebs’ Skin 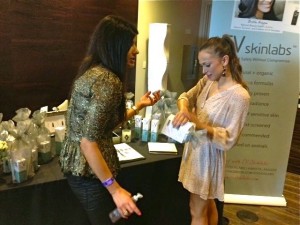 In addition to connecting with people around the subject of cancer, I also had a blast just talking straight glam. And one of the queens of glam is Karina Smirnoff of Dancing with the Stars. (Shown here with me, trying the products.) You’ve seen how this girl can move. You may be surprised to learn, however, that the constant spray tanning she has to do to look so dynamite in those dancing costumes dries out her skin. So I showed her our Body Repair Lotion, and she was so impressed with the silky, luxurious texture, how fast it absorbed into the skin, and the amazing glow it left behind, that she shared with the Hollywood reporter as they filmed her applying the lotion!

Then I spent some time speaking with model Ali Landry (here on the right), former Miss USA and owner of the Belle Parish Lifestyle Brand. She told me that she and her family share skin sensitivity issues, and talked about the difficulty of finding safe products that won’t cause irritation and redness. Of course I recommended a whole CV Skinlabs prescription for all of them!

And though I found that most celebrities hadn’t thought about the potential health ramifications of using toxic products (mostly the men, who all received the Rescue + Relief Spray for aftershave), that wasn’t the case with actress and model Audrina Patridge. (She’s here on the left with me.) Having starred in the television series The Hills, Dream Maker, and Dancing with the Stars, she was very aware of the toxins that are in so many products. She told me she had just finished looking at the ratings for all her products on the Skin Deep Cosmetics Database, created by the Environmental Working Group. CV Skinlabs is made without all those nasty chemicals, so I gave her a few products to try.

There were over 60 other celebrities who stopped by and it was such a pleasure to meet them and talk with them. Below are a couple more shots, one with Jane Lynch of Glee, and Matt LaBlanc (on the left) from Friends. This was a picture of him with his writers from his new show, Episodes. Others included Perrey Reeves from Entourage, Australian singer Cody Simpson, Cheryl Burke from Dancing with the Stars, Brian White from Beauty and the Beast, Derek Hough from Dancing with the Stars, Laura Prepon from Orange is the New Black, Willie Garson from Sex and the City and White Collar, and Bitsie Tulloch from Grimm.

Celebrities Autograph Products to Raffle Off for Future Cancer Events

Some of the celebrities who stopped by were kind enough to take a moment to autograph some of our products. These will be used to raffle off at future events as we continue our work to increase awareness about reducing toxic exposure, and to get these nourishing products into cancer centers where they’re needed.

Rumor Willis (daughter of Demi Moore and Bruce Willis), designer Whitney Port, and actress Ashley Jones from True Blood and The Bold and the Beautiful, helped us out by signing products.

The Feedback So Far

Michelle Williams of Destiny’s Child Tweeted that she loved our Body Repair Lotion and Calming Moisture. Check it out!

Then Jonathan Bennett tweeted that he loved CV Skinlabs, and couldn’t wait to have his dad try the products.

All in all, it was a great experience. We’ll keep you updated with the developments as we go!

Shop now for your own CV Skinlabs products!