Want to Help Someone with Cancer? Send Them a Card on April 10!

We love stories of triumph over tragedy, so here’s another one for you. What would you do if you were told you were going to die of cervical cancer? If somehow you skirted that diagnosis, what would you do after years of harrowing treatment that included chemotherapy, radiation, and the removal of one of your kidneys?

For Meaghan Edelstein, the answers are “keep fighting” and “reach out to help others.” Diagnosed with stage 3B cervical cancer in February 2007, she wasn’t given much hope for survival. For two months prior, doctors insisted her symptoms were caused by stress. When they finally realized what was going on, they thought it was too late.

“After dragging herself to the emergency room and having a CT scan performed,” says Meaghan’s boyfriend, Bryan Power, “they basically told her, ‘Call your friends and family. You have cervical cancer.’ They didn’t expect her to survive.”

Fortunately, Meaghan was accepted into the Dana Farber Cancer Institute. “They saved her life,” Bryan says. “You could see they actually cared.”

After a grueling period of treatment and surgeries, Meaghan is recovering. According to Bryan and many of her friends and family, it’s a miracle. “She seems almost normal now, physically,” Bryan says. “They can’t claim she’s cancer free yet, but she has come a long way.”

Despite her long battle, Meaghan finished law school and passed the bar exam. After treatment, however, she no longer wanted to be a lawyer. She blogged about her experience and began connecting with other cancer fighters and survivors. She realized many needed help they weren’t getting, so she created a new organization called “Spirit Jump.” The mission? Raise the spirits of men, women, and children battling cancer.

“This is a program that connects those in need to those who want to help,” Bryan says. “If someone has cancer or some other debilitating disease, they can go to our website and sign up as a ‘jumpee.’ If someone wants to help, they can sign up as a ‘jumper.’ There are no mandatory requirements. We simply give people a way to help other people, and the response has been fantastic!”

Spirit Jump sends out regular e-mails detailing the stories of registered jumpees. Jumpers respond as they wish. Most send cards, and some even create homemade gifts. The point is to let fighters know that someone cares.

“When I was going through treatment,” Meaghan says, “the things that got me through were the cards, flowers, and little gifts people would send. Cancer can be a really lonely experience. I was lucky in that I had family and friends to support me, but many people don’t have that. I wanted to change that.” 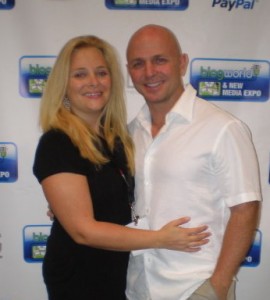 “People are collecting uplifting cards and will deliver them to cancer centers around the world,” Bryan says. “We thought it would be a great way to reach out on a bigger scale.”

Bryan was right. Already over 800 have signed up for the day. Many are putting teams together and having card-making parties, with several planning on delivering hundreds of cards! Participants in the U.S., Germany, Switzerland, England, Brazil, and more are planning to help, with many schools getting in on the act. (You can see pictures of some of the cards on Facebook.) Bryan says he and Meaghan never expected such a large response, but they’re excited and plan to continue the event in the future.

“The magic of this is that people can put the time into it, then really see the impact of their efforts,” Bryan says. “We’re not just tossing money into some unseen pot.”

Meaghan agrees. “My experience gave me a gift, really,” she says. “I’m now able to relate to and touch a lot of other people because of it. I want to inspire others to fight, and to never give up. So many doctors wouldn’t listen to me when I was having symptoms, and when they finally diagnosed me they gave me little hope. Through Spirit Jump and Cards 4 Cancer day, we want to tell people-don’t give up. People care. We care.”

If you want to participate in Cards 4 Cancer day on April 10, please go to Cards4Cancer.org.