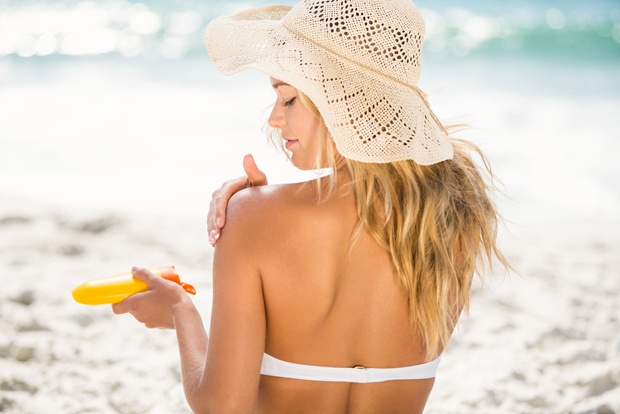 Shopping for Sunscreen-What About Oxybenzone & Nanoparticles?

With the warmer weather, we’re all being reminded to protect our skin when we go outside. Not all sunscreens are equally safe, however.

I’ve talked about chemical sunscreens before, but today I want to focus on two particularly concerning formulas: those made with oxybenzone, and those made with nanoparticles.

Why It’s Best to Avoid Oxybenzone

Oxybenzone (also called “benzophenone-3”) belongs to a class of chemical compounds called “benzophenones” that are used in the printing industry, as well as in plastics, perfumes, soaps, and more. Oxybenzone is mainly a manufactured chemical, and is one of the most widely used sunscreens today.

What’s good about oxybenzone is that it offers broad-spectrum protection from both UVA and UVB rays, and it blends well in formulas. That means that it won’t create a white film on your skin when you rub it on.

But that’s about where the good stuff ends. Here’s why I prefer to avoid this ingredient when looking for sunscreen:

For these reasons-and until we know more-I would recommend avoiding this ingredient.

Used to be when you put on certain sunscreens, you ended up with white marks on your skin. So-called “physical” sunscreens-namely, zinc oxide and titanium dioxide, which are considered safer than chemical sunscreens-are white, chalky minerals that naturally reflect UV rays, but don’t look particularly attractive on skin.

To counteract this tendency and produce more invisible formulas, manufacturers broke the ingredients down into smaller particles. First we had micronized formulas, which were made by grinding larger particles into smaller ones, to create a smoother appearance when the cream was applied. Thinking smaller would be better, manufacturers went even further by shrinking the particles a little more.

At first, this new technology was considered a breakthrough, as finally everyone could use these safer sunscreen without fear of the ghostly look. Later, however, we started hearing about some concerns.

As we make these particles smaller, aren’t they more likely to absorb into the skin and into the bloodstream? Typically both sit on the surface of skin, where they block both UVA and UBV rays. But what if they get inside the body?

The Australian Education Union (AEU) stated in May 2011 that it was concerned about nanoparticles in sunscreen, and advised all education workspaces to refrain from using it. A 2010 laboratory study, also reported that zinc oxide nanoparticles could cause cell death, and a 2012 study suggested that zinc oxide, when present in nanoparticles, could also generate free radicals when exposed to UV rays.

There have been several studies, however, that have come up with different conclusions. In 2011, for instance, scientists found that ultra-tiny zinc oxide particles did not penetrate beneath the outermost layer of skin cells, so would be unlikely to increase free radical damage. An earlier 2009 study showed similar results, as did a 2007 study.

A 2009 report by the Australian government’s Therapeutic Goods Administration reviewed the studies available at that time, and also concluded that in 15 out of 16 studies, neither titanium dioxide nor zinc oxide were able to reach viable cells in the body.

The Environmental Working Group agrees, noting that sunscreen manufacturers can use “surface coatings” that actually reduce the potential for the formation of free radicals, and maintains that both of these ingredients “pose a lower hazard than most other sunscreen ingredients approved for the U.S. market.”

They make one exception however-spray or powder formulas that may be inhaled.

Since nanoparticles are so small, they can potentially be inhaled, where they may contaminate the lungs. “Inhalation of nanoparticles is dangerous for many reasons,” they note, and strongly discourage customers from using powder or spray sunscreens with physical sunscreens like zinc oxide and titanium dioxide.

The EWG provides a great report on sunscreens here that you can use to find safe products. Overall, my recommendation are:

What do you think of these two issues? Do you avoid oxybenzone? Please share your thoughts.

Colin Stuart, “Why sunscreens are in the nanotechnology safety spotlight,” The Guardian, December 22, 2011, http://www.theguardian.com/nanotechnology-world/sunscreens-in-the-nanotechnology-safety-spotlight.