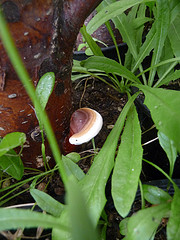 Prevent (Even Treat?) Cancer with a Mushroom?

Traditional oriental medicine said it could make you immortal. Science has yet to prove that (!), but the little reishi mushroom just might help you avoid cancer.

Scientifically named ganoderma (which means “shiny skin” in Latin), reishis have a reddish-brown cap, are kidney shaped, and like to attach themselves to oak and plum trees. They grow in moist and temperate forest areas in Asia, Europe, South America, and the U.S., but are relatively rare in nature and therefore, often cultivated. However, because they tend to be tough and bitter, these aren’t the type of mushrooms you typically find in salads. They’re best served cooked, and make a popular tea. Many people take reishi in extract form, because of its health benefits.

Reishis have been used in oriental medicine for nearly 4,000 years, for everything from heart conditions to asthma. Modern science has found them to contain active ingredients like polysaccharides, which help stimulate the immune system, and triterpenes, which lower blood pressure and improve circulation. According to Carolyn Vachani, RN, MSN, AOCN, from the Abramson Cancer Center of the University of Pennsylvania, the reishi is used in cancer therapy for its ability to stimulate the immune system. In fact, Sharon Brucato wrote a book that talks about how reishi’s healing properties have been used for cancer therapy by more than one million people in China. Vachani says it’s sanctioned by the Japanese Health Ministry to be given in conjunction with standard cancer therapy.

Recently, the reishi has been accepted by the U.S. FDA for review as a possible cancer therapy. More studies need to be done, as many preliminary results were achieved only in the lab, but early evidence looks promising. Researchers found reishi extract starved tumor cells while protecting healthy cells, reducing the side effects of chemotherapy and radiation. Studies done in rats show that reishi extract may alleviate chemotherapy-induced nausea. Laboratory studies found reishi mushrooms to work against estrogen receptors, potentially preventing or treating some breast cancers, as well as to cause cell death in lymphoma cells. According to Dr. Ray Sahelian, extracts from reishi inhibited colon tumors in mice. And the benefits don’t stop with cancer. Studies have shown the reishi effective against chronic bronchitis, migraine headaches, hypertension, sleeplessness, and as a detoxifying agent.

Are reishis safe to take? According to reishi.com, on the whole, they are, as few side effects have been reported in clinical studies. The American Herbal Pharmocopoeia classifies the reishi as a “class-1” herb that can be safely consumed when used appropriately. Sensitive people may experience some gastric discomfort, as a result of the “detoxification” effect, which should disappear within a few days. However, allergic reactions are possible, so be sure to check with your doctor. Reishi.com and other nutritional experts advise you to take vitamin C with any sort of reishi preparation, as it helps break down the polysaccharides into absorbable pieces. Results are expected typically after two weeks.

If you’re searching for a supplement, you have a choice of tablets, capsules, or granular form. Effectiveness and potency varies by the manufacturer, so search for a high-quality brand. Reishi.com recommends products from Japan, as they are the ones who first cultivated Reishi commercially.

Have you found a great reishi supplement? Please share!