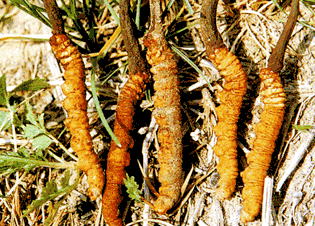 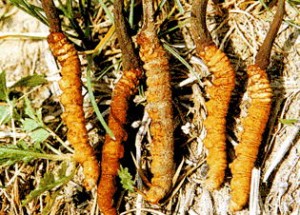 I’ve posted about mushrooms before and their ability to fight cancer, but there’s new news about a different type of mushroom that may inhibit cancer growth.

It’s called the “corcyceps” mushroom. Cordyceps is actually the name of the genus-it includes hundreds of species of mushrooms, including “militaris,” “unilateralis,” and “sinensis (shown here).” So far, it’s “sinensis” that’s getting attention from scientists.

This mushroom was used in ancient Chinese medicine to restore energy, stimulate the immune system, and promote long life. It’s naturally found in the mountains of China, in Japan, and in the eastern U.S., but it’s usually grown in laboratories because it’s tough to find it and collect it from the wild. So strong was its reputation that back in the 1950s, scientists isolated its chemical constituents (which include protein, amino acids, fatty acids, D-mannitol, and others), and determined that it had power as a cancer treatment. Research went so far as to create a drug, but it was found to be ineffective because it broke down too quickly in the body.

Researchers weren’t about to give up, however. In the 1970s, a study showed that cordyceps inhibited the production of DNA and RNA synthesis in cancer cells (Plageman and Erabe, 1971). In the 1980s another study showed antitumor activity on bladder, kidney, colon, and lung cancer (Hubell et al., 1985). There were more in between. Finally, in 2009, scientists at Britain’s University of Nottingham started a new line of research to combine the cordyceps formulation with other drugs to help it last longer in the body.

So far, Nottingham researchers have found that cordycepin (the name of the formulation) inhibits the uncontrolled growth and division of cells and prevents cells from sticking together, blocking growth. With this new knowledge, they can predict what types of cancers may be sensitive to treatment with it, as well as narrow down the list of possible partner drugs.

The good news is this is all really promising. Researchers are serious about finding natural options for the treatment of cancer, and so far mushrooms are one of the top-running candidates. As far as cordyceps, however, we’re still in the infant stages-test tube and animal studies. Science needs time to branch out into significant human trials. What can you do in the meantime?

Proceed with caution. Cordyceps can have hypoglycemic effects, so diabetics need to monitor themselves carefully. The Memorial Sloan-Kettering Cancer Center also recommends caution for those with prostate cancer and myelogenous (blood) type cancers. Cordyceps has stimulated the growth of red blood cells and testosterone in animal studies. Always check with your doctor. If you want to take advantage of the nutritional benefits of this fungi, buy from a reputable manufacturer, and try a supplement with standardized extract of cordyceps mushroom.

What do you know about cordyceps mushroom? Please share your story.