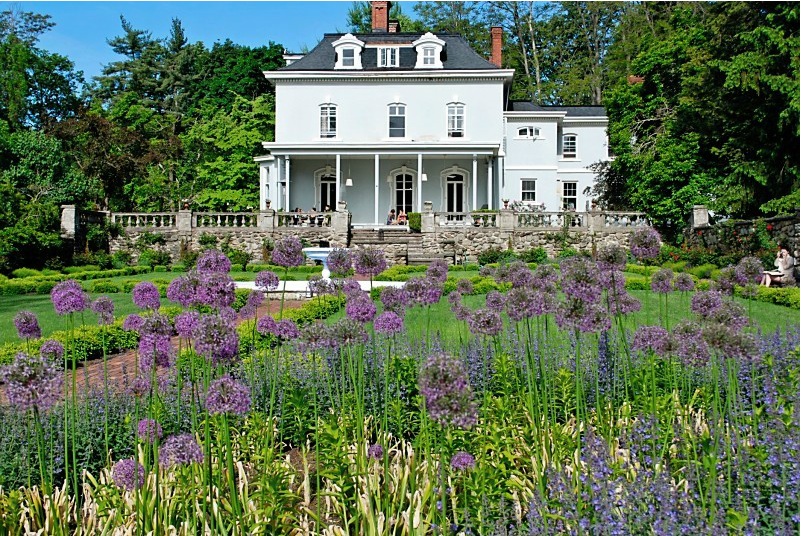 Need to Recuperate? Try the Magic of Yoga and Organic Nutrition at "The Garden"

Several weeks ago, I was in the middle of a burnout. After releasing my new skin care line, I realized I hadn’t stopped to take a breather for quite awhile, and I was feeling the effects. I got tired quickly, felt my attention wandering, and just lacked that energy and zest for life that I usually have. I new it was time for a break.

What a blessing it was, then, to discover that one of the most restorative retreats available in the country was only about 90 minutes away from me, right here in New York! Called “The Garden,” it’s run by architect and entrepreneur Maria Gray and her founding partner, integrative nutritionist Dages Keates.

The retreat itself takes place in the beautiful restored 18th-century villa near Beacon in the Hudson Valley (pictured here). But the magic takes place inside the walls, where a program of yoga classes, organic vegetarian cooking lessons, massage sessions, and meditation periods helped me to slow down, remember my body, and reconnect to my spirit. I walked in stressed and frazzled, and walked out at the end of the weekend glowing and refreshed with the extra bonus of having established new friendships.

I was so impressed by the place and by Maria, herself, that I asked her to tell us more about what inspired her to establish The Garden in the first place, and to explain what it is about this special blend of classes that is so restorative, relaxing, and regenerating.

How would you describe The Garden? What is it, exactly?

I see it as the integration of yoga and nutrition, with a dash of true human interaction. Our philosophy is that when engaged in these elements, the body is awakened to everything around it, which opens up the spirit to being fully present. When you’re fully present in your life, you’re more likely to make decisions that are good for you, individually, but are also good for your family and your community.

How did you get started?

I started it four years ago. At that time, everything sort of came together. I had been very active in my yoga community, and through that I was introduced to my founding parter, Dages. Through working with her, I became educated and found that the integration of good food into my yoga practice created this wonderful holistic effect on my health. I got so excited about it that I wanted to expose as many of my friends to the idea as possible, and that’s kind of how The Garden came to be.

What inspired you to turn to these healthy habits?

I had spent the first nine years of my early childhood outside of the country, five years of that in India. So yoga was a natural thing for me as I had done it as a child. Then, more recently, I was going through a separation from my husband, which of course was a huge transition in my life. Going through that, I found myself returning to yoga. Initially it was purely a gift to myself. The yoga studio was only a couple blocks away, and I could go after my son had gone to bed for the night, so it was the perfect private escape.

As time went on, though, I found that not only was yoga helping to relieve my stress, but it was making me feel stronger. As I was strengthening my body, I felt stronger as a woman, which made me feel more confident about my position in my family and in my life. On my yoga mat, I could set goals and attain them, and there was no “other” to worry about, which helped me to gradually feel stronger and more reassured.

So how did that experience transform into this idea for this wonderful retreat?

My partner and I felt that these were such healthy practices-the yoga and the organic nutrition-that they should be offered in a convenient way to people in nearby New York City. Those of us who live in the city know what an intense environment it is. We wanted to create a space outside the city in nature, but near enough that someone from New York could get there for a weekend.

And you obviously achieved that, as I experienced. So maybe you can tell me-what do you think are the top benefits of your retreat?

First of all, yoga brings you back to your body. We urbanites live from the neck, up. We overanalyze everything. We think too much. Through yoga, you recharge every atom in your body, so you start sensing things you haven’t before. You become more sensitive to your environment, to what you’re eating, and to how you’re moving. Certain poses ask your arms to do something, but while you’re doing that, you have to have an equal balance in your legs. Through these movements, your whole body awakens. You start to feel more alive, which naturally makes you want to eat better foods and enjoy more life-giving environments.

Second, we have the benefits of nutrition. I used to think I ate fairly well. I avoided processed foods, ate fish and vegetables and grains, and the like. But when I started really paying attention to nutrition-just a 10 percent shift in the types of foods I was eating-it awakened my body so much that it affected every area of my life. I see that same change in our guests.

Finally, I think the biggest benefit I see is that at the end of the weekend, everyone is hugging each other. People come in the driveway and they seem tired, stressed, and guarded. Through the weekend, as we participate in these activities, we experience an awakening in our bodies, but also an opening of our spirits, to where we are more receptive and interested in the people around us. At The Garden, we encourage much more personal conversations, and that’s such a powerful and healthy thing.

To schedule your weekend at The Garden, please visit their website.