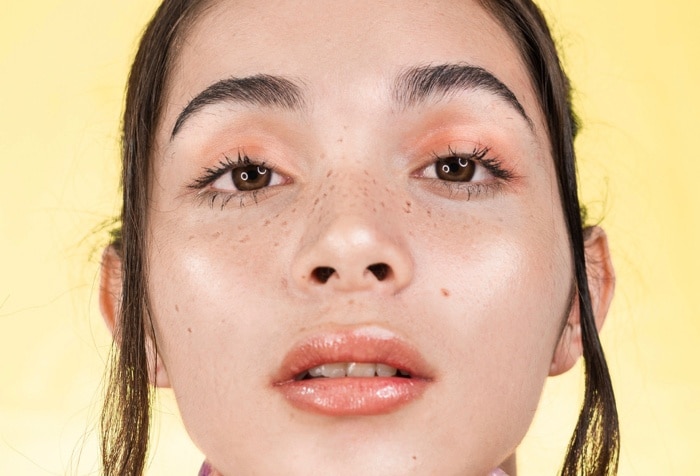 You move in closer to the mirror. There. A new dark spot on your skin. Was it there before? You shift back and forth, checking it from varying angles.

Hmm. It looked like just a dark spot at first, but now you’re not sure. One thing you do know—it wasn’t there before. At least you don’t think it was.

Spotting a mark on your skin is not usually a happy occasion. We’d all prefer our skin look smooth and flawless for the rest of our days, but unfortunately, that’s rarely the case.

To help you determine exactly what those marks are on your skin, we’ve got some guidelines below. If you’re ever even the slightest bit concerned about something you see, don’t hesitate to see your dermatologist.

You can tell the difference by asking yourself when you first noticed the freckles. If you had them even when you were a child, they’re most likely the genetic type. But if you didn’t get them until after you became an adult, they’re probably caused by sun damage.

It could be that you have a combination of both. You could have genetic freckles that tend to show up—or at least get darker—when your skin is exposed to the sun.

Either way, freckles are made up of skin cells with extra pigment. Unlike moles, they’re flat on the skin and typically occur in groups like patches. Light-colored skin types are more prone to freckles, particularly when exposed to the sun, as are those with light or red hair with fair skin and blue eyes.

Solution: If you don’t like your freckles, you can help fade them by protecting your skin from the sun with sunscreen and clothing, and by exfoliating your skin regularly. You can also try lightening formulas—just avoid hydroquinone, which can damage skin over time.

Moles are a type of skin growth, but a typically harmless one. They occur when pigmented cells in the skin grow in clusters or clumps instead of being spread out evenly. They are the result of cellular overgrowth, and they come in three basic types:

Unlike freckles, moles are usually raised from the skin, and you can feel the bump when you touch them. Though most are harmless, it is important to keep an eye on any you have, as in rare cases, they can become cancerous.

Moles can appear anywhere, even on the scalp and between the fingers and toes. Most appear during childhood and adolescence, and then they may grow and change as we age. Safe moles appear symmetrical and round, with clearly defined borders. They should be smaller than a pencil eraser, and the same color throughout—brown, black, or skin-colored is most common.

Signs that a mole may be a cause for concern include:

3. Birthmarks Are There from the Start

Birthmarks show up at the same time you do—at birth. They come in all sorts of shapes, sizes, and colors, and can show up anywhere on the skin. Scientists don’t know for sure what causes them, but they’re usually harmless.

There is a type of birthmark called a “strawberry” birthmark that forms shortly after birth and grows rapidly to form a bright red raised area. These are best treated immediately, as they can form wounds and bleed, or they may interfere with the eyes, nose, or mouth, depending on where they’re located.

In addition, hemangiomas—which are pink, blue, or bright red and grow quickly during the first few months of a baby’s life—can increase the risk of skin cancer later in life, and should be regularly monitored.

Solution: Your birthmark is unlikely to cause any health problems, but if you’re concerned, check with your dermatologist. If you want to get rid of it, laser treatments and surgery may help. Many birthmarks also fade on their own.

Larger, flat, brown spots on the face and hands that appear at middle-age and beyond are known as age spots or liver spots. They are flat like freckles and are the result of aging and sun damage. They can form anywhere the skin is exposed to the sun or tanning beds, like the face, hands, arms, décolletage, and legs.

Solution: Skin lightening products can help fade these spots, followed by careful protection from the sun. You can also try chemical peels, laser treatments, and microdermabrasion.

How have you dealt with the spots and marks on your skin?