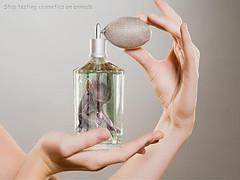 Cruelty-Free Testing-Why Are Some Cosmetic Companies Still Testing On Animals?

Animal testing has become extremely unpopular around the world, particularly when it comes to cosmetics and personal-care products. The European Union is on its way to completely banning any products that have benefited from testing on animals, but so far in the U.S., it hasn’t gone that far. What’s the hold-up?

Many personal-care companies have already stepped away from the practice, including Avon, Almay, Jason Natural Cosmetics, Liz Claiborne Cosmetics, and many more. However, according to caringconsumer.com, some are apparently still doing it at least on some of their product lines-companies like Clairol, L’Oréal, Max Factor, Olay, and Ponds. And some, to avoid bans or market their animal-friendly stance, outsource the testing to other companies.

What are these tests for? Usually, to make sure the product (or an ingredient in the product) won’t irritate or harm human eyes or skin. Eye shadows are tested on rabbits to determine damage or irritation. Sunscreens are tested on guinea pigs to test for allergic reactions or skin irritations. Many times, the animals suffer pain, bleeding, or even death as a result. So why do companies do it?

Originally, animal testing was done to protect human health. Consumers wanted safe and effective cosmetics, so as companies developed new formulas, they tested them on animals first, to be sure they would have no adverse affects on humans.

Unfortunately, cosmetic testing on animals can cause severe allergic reactions, liver problems, ulcerations, swollen eyelids, and even death. Besides that, it’s expensive, and animal skin doesn’t respond the same as human skin, so sometimes the results aren’t even reliable. Most importantly, alternatives are available. In vitro testing using cell cultures as well as sophisticated computer models are now used as alternatives to torturing animals.

Fortunately, most companies know that we consumers don’t approve of blinding rabbits for the sake of a new mascara, so they’re using ingredients that have already been proven safe, or that can be tested by other methods-including on human volunteers. It’s not necessarily simple. Alternatives to animal testing can be difficult to find. But it is possible, as “cornea” testing has demonstrated. (The FDA has approved the use of bovine and chicken corneas for use as proof that an eye product is safe.)

“Recognition of the inadequacy of animal toxicity testing has resulted in the development of better techniques,” says Kara Rogers, Ph.D., biomedical sciences editor for Britannica.com.  “An example of a toxicity test performed on animals that often produces inaccurate results is the Draize test, in which a chemical, such as a cosmetic or pharmaceutical agent, is applied to the skin or eye of a rabbit. The results are supposed to indicate how toxic a chemical is to human skin. The inaccuracy of the Draize test has been recognized for many years, but its replacement has not been a simple matter…The European Union recently approved a replacement for the Draize test called the EpiSkin® test, which is an in vitro method that uses test-tube–sized models of human skin. The approval of EpiSkin® is a milestone in the progress toward discovering reliable alternatives to animal testing.”

The more we demand that animals be treated humanely, the more we’ll encourage scientists and companies to find alternatives to hurting another species. Look for labels like “No Animal Testing” on your products, and check out lists like this one from caringconsumer.com.

Cinco Vidas does not approve of animal testing and strongly urges consumers to buy from those companies who use alternative testing practices.

Photo courtesy of meta-morphosis via Flickr.com.