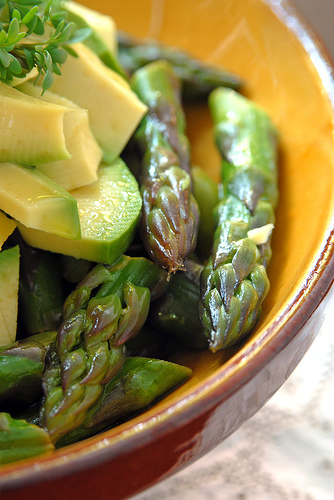 Asparagus: Cancer Cure, or a Stalk of Green Hype? 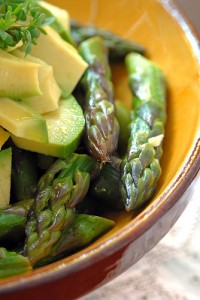 You may have seen the e-mail circulating around: “Asparagus cures cancer!” True, or just another one of those empty e-mail promises?

As is typically the case with such rumors, there’s a little bit of truth with a lot of hype mixed in. Obviously, if there were sufficient evidence to support the idea that asparagus cured cancer, a lot more people would be drinking a green puree with dinner. And a lot fewer people would be suffering from the disease.

If we’re looking strictly at the cancer-fighting potential of the vegetable, however, asparagus is definitely a star. It’s packed with nutrients like folic acid, vitamin C, potassium, thiamin and vitamin B6. It’s low in calories, sodium and cholesterol. And-here’s the biggie-according to the National Cancer Institute, it’s the highest-tested food containing glutathione, one of the body’s most potent cancer fighters. (It helps repair damaged DNA, and ushers toxins out of the body.) Tests indicated that asparagus from Washington contain 70mg/100g of glutathione, more than twice the amount in any other common food. Additionally, asparagus is high in rutin, which strengthens blood vessels, and according to Food Paper author Rachel Levin, it also maintains digestive health with naturally occurring fiber and inulin.

So if you’re looking to help prevent cancer, sustain remission, or support your body during treatment, getting regular servings of asparagus is a great idea. However, don’t go overboard, particularly if you’re undergoing treatment. According to the American Cancer Society, high doses of folic acid can interfere with cancer treatments. Since asparagus contains a good amount of folic acid, keep servings to a max of two a day.

As to the rumored “cure,” consider it speculation. It was apparently started in an article entitled, “Asparagus for cancer” which, according to the circulated e-mail, was printed in the Cancer News Journal, December 1979. (We weren’t able to obtain a copy to confirm.) The article is supposed to have reported on the experiences of Richard R. Vensal, D.D.S., who recorded several cases where an asparagus regimen preceded remission. However, other reasons for the remissions were not examined, and currently, there are no clinical studies proving that asparagus cures cancer.

There are, however, studies that link asparagus with potent cancer-fighting abilities. One in 2008 examined the anti-tumor activity of “saponins” taken from the vegetable. According to the Ontario Asparagus Growers’ Marketing Board, preliminary laboratory and animal studies have also shown glutathione to have some cancer-inhibiting properties.

Find some tasty recipes from author Melissa Breyer at Care2.com.

Have you seen a copy of the original article about Dr. Vensal’s findings? Do you have any recommendations on how to prepare delicious asparagus? Let us know!

Photo courtesy of sonicwalker via Flickr.com.