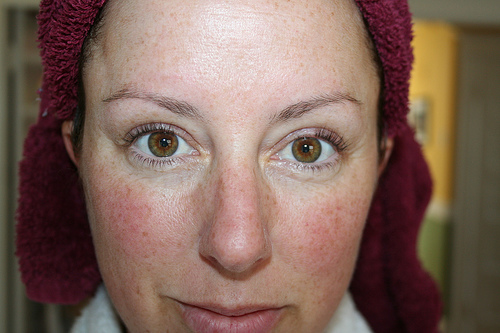 All About Rosacea-with Tips for Managing It

For many people, skin conditions can be irritating, frustrating, and even painful, but for people with rosacea, the effects are often much more devastating. According to one survey, nearly 70 percent of people with rosacea said it lowered their confidence and self-esteem, and 41 percent said it caused them to avoid public contact or cancel social engagements.

It’s easy to see why rosacea can have such far-reaching effects. The condition causes a very noticeable redness and swelling, primarily on the face, though it can also effect the scalp, neck, ears, chest, and back, with some people even suffering from burning and grittiness in the eyes. Oftentimes it starts out as a tendency to blush easily, but then can get gradually worse until the redness stays present most of the time. As it progresses, the condition takes on a sort of “mean” personality, in that it “flares up” in response to a variety of triggers, including hot weather, stress, spicy foods, exercise, sun and wind exposure, alcohol, and hot baths.

In doing my research, my heart just hurt when I saw what these people have to go through. Look at these comments:

“I had been suffering with Rosacea for about 20 years,” writes SarahLynn on skincaretalk.com. “People used to tease me about blushing, then one day I had a permanent blush. I was very pale under the eyes, so I looked like a pink raccoon.”

“Rosacea is a rather embarrassing disease,” writes Meredith Ball, editor of Natural Living. “One of my worst nightmares at the time was having to appear in public with absolutely no make-up on.”

Rosacea doesn’t feel good, either. You know what dry skin feels like-rosacea is often worse. It can burn and sting, especially when exposed to certain lotions and chemicals, and can feel as tender as sunburned skin.

What causes rosacea? Like most skin conditions, there isn’t one clear answer. Research has found that it seems to run in families, and tends to be more prevalent in people over 30 years old with fair skin, blonde hair and blue eyes, with women getting it more often than men. (Though men who have it can experience more severe symptoms.) However, the condition can affect all kinds of people at all ages. Some scientists have theorized that a certain kind of bacteria may be to blame, or that a type of mite that lives in hair follicles could have something to do with it, but so far there is just no definitive answer.

What we do know is that it’s important to treat rosacea as soon as you suspect you may have it. Early diagnosis and treatment, according to skincarephysicians.com, can control the signs and symptoms to help keep the condition from being visible or uncomfortable. (Treatments vary according to the type of rosacea you have.) Without treatment, it can get progressively worse, creating a swollen nose and darker redness and bumps on the skin that are more difficult to control. Lifestyle changes such as avoiding certain stimulants, choosing sensitive skin care products, and adopting stress-relief habits can also help reduce flare-ups.

“The good news is that, while rosacea cannot be cured, it can be effectively controlled with medical therapy and lifestyle changes,” says Dr. Larry Millikan, chairman of dermatology at Tulane University. “It is essential for anyone with signs of rosacea to see a dermatologist for diagnosis and appropriate treatment before their condition reaches more serious stages.”

How can you tell if you may have rosacea? Watch for the following signs and check with your dermatologist:

Do you have rosacea? Please share any tips with our readers.

Photo courtesy the kristiewells via Flickr.com.