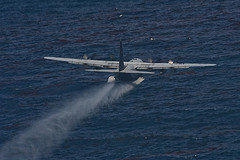 You may have heard about the dispersants British Petroleum (BP) is using to try to break up the oil gushing into the Gulf of Mexico. The main one is called “Corexit,” which was originally developed by Exxon. (They used it in the Exxon Valdez disaster in Alaska in 1989.) It’s a detergent, like a dishwashing detergent. You know how soap breaks up oil-this is the same idea. The hope is that it will break the oil film into smaller droplets that will then mix with the seawater. This makes it less visible, though it doesn’t actually do anything to remove it.

Many have questioned whether Corexit is safe. The Environmental Protection Agency (EPA) has identified the 2-butoxyethanol in the dispersant to be one of the reasons why Exxon Valdez cleanup workers experienced respiratory, nervous system, liver, kidney, and blood disorders. On May 19, 2010, the EPA gave BP 24 hours to choose less toxic alternatives to Corexit, but so far BP has refused to change, citing safety and availability concerns with alternatives. The EPA asserts that the quantities of Corexit that BP is using in the gulf will create unprecedented damage to organisms underwater, say nothing of its toxicity to humans.

According to “Natural News,” the EPA has also revealed that Corexit contains dioctyl sodium sulfosuccinate, a detergent chemical found in laxatives. It was interesting to us at Cinco Vidas that Corexit contains propylene glycol, which is also used as a solvent or moisturizer in personal care products and cosmetics. It’s one of our ingredients to avoid, because it’s drying and can cause allergic reactions and eczema, particularly for cancer patients going through chemotherapy. (Watch out for “PEG” or “PPG” on the label.) Worse, it’s known to consume oxygen while degrading in surface waters, robbing aquatic organisms of the oxygen they need to survive. Is this really something we should be dumping into the gulf?

Many question the wisdom of using a dispersant at all. Since it doesn’t get rid of the oil, why make it harder for marine life with the addition of toxic chemicals? Dispersants also make it more difficult to clean up the oil, since it’s harder to see. Worst of all, we don’t know what the long-term consequences will be of using so much of these chemicals in our waters. It’s like a giant science experiment out of control. Is it a coincidence that the company who produces Corexit-Nalco Holding Company-is associated with BP and Exxon? Is this why, so far, no alternatives have been tried?

We hope the EPA will be able to do something to improve this situation. In the meantime, we urge you to help however you can. If you’re not sure where to send your relief dollars (or goods), we’ve put together some links below. For example, Matter of Trust is taking donations of all kinds of hair, fur, fleece, and feathers to help build “booms” to keep the oil off the beaches.

What do you think of the thousands of gallons of dispersants being dumped into the gulf? Please share your thoughts.