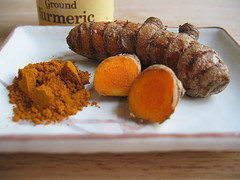 You’ve probably never thought about it when spreading yellow mustard on your favorite sandwich, or when marinating your steaks in Worcestershire sauce, but turmeric-a main ingredient in both these condiments-could help you avoid cancer.

A part of the ginger family, turmeric has long been used in foods for its flavor and ability to turn recipes yellow. According to the culinarycafe.com, it’s been used as a dye, flavoring, and medicine since 600 B.C., and is currently grown in India, China, and Indonesia. The root is the source of the food, which is then boiled, steamed, dried, and ground. The flavor is usually described as pungent, buttery, and slightly bitter.

What’s particularly exciting about this bright spice is its ability to fight cancer and possibly, Alzheimer’s. A recent study at the University of Missouri found that curcumin-the main biologically active phytochemical in turmeric-decreased the incidence of breast tumors in animals, delayed the onset of the disease, and reduced the incidence of multiple tumors. Researchers theorize that it may help lower the risk of breast cancer after exposure to hormone replacement therapy.

In other studies, curcumin showed the ability to kill cancer cells and prevent more from growing-including breast, bowel, stomach, colon, and skin-cancer cells. Researchers from the University of Texas have been studying the antioxidant and anti-inflammatory effects of curcumin, and have found that it can block the chemical pathway required for certain forms of cancer to spread by inhibiting the protein NF-kB-a kind of protein that can cause abnormal inflammations. A daily dose of curcumin has also shown to slow the growth of pancreatic cancer. Natural News reported in 2004 that after noting the rareness of leukemia in Asia, researchers traced the benefit to turmeric, often consumed in curry spice. Also interesting: a study in California found that curcumin broke up plaque formations in the brain caused by Alzheimer’s. (Also, read our post on how turmeric can help reduce damage to the skin from radiation treatments.)

More studies are underway to determine the extent of curcumin’s healing abilities, and to explore any safety concerns. For now, to get more curcumin-or turmeric-in your diet, try the spice in relishes and fish soups, or blended with melted butter and drizzled over pasta, potatoes, or cooked vegetables. You can find ground and whole versions in most spice sections, where it may also be called Indian saffron. To check out some potent turmeric recipes, take a look at Cooking with Foods that Fight Cancer (2007, DK Adult), which has a whole section on herbs and spices, including turmeric. You’ll find more recipes here, plus you may want to consider turmeric tea, which you can make by boiling 4 cups of water in a pot, adding 1 tsp of turmeric, and simmering for 8–10 minutes. Add ginger, honey, or lemon to enhance the flavor. (Dr. Weil has the recipe here.)

Do you have a favorite turmeric recipe? Have you experienced the benefits of this spice? Please share your story.

Photo courtesy of Sashertootie via Flickr.com.