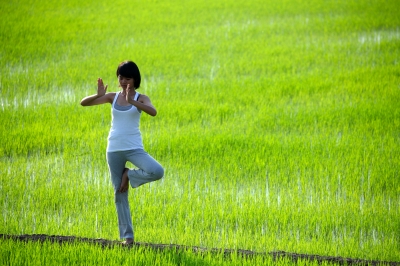 I’ve talked about yoga a lot on this post. Two years ago, I told you all how it changed my life. I’ve talked about how it rewires the brain, soothing mood swings and brain fog. It helps soothe the side effects of cancer, and restores flexibility and movement after surgery.

If you haven’t tried yoga yet, here’s another reason why you should: yoga can help you recover from cancer and its treatments.

The new study was published in the Journal of Clinical Oncology on January 27, 2014. Researchers assigned 200 breast cancer survivors to either 12 weeks of 90-minute hatha yoga classes twice a week, or a wait-list control. Blood tests were performed both before and after the trial. After three months, results showed:

This was one of the few studies to show actual biological evidence that yoga helped reduce inflammation and improve health of the body. This is key in cancer survivors, as the treatments and the trauma of the disease often leave behind high levels of stress and fatigue, which fuels inflammation, and inflammation can lead to all kinds of additional complications and other diseases, like heart disease, diabetes, aches and pains, and more.

“Chronic inflammation may fuel declines in physical function leading to frailty and disability,” the researchers wrote. “If yoga dampens or limits both fatigue and inflammation, then regular practice could have substantial health benefits.

What was even more impressive about this study was that participants continued to benefit even after it was over. Researchers followed up at the six-month point and found that health measures in the yoga group had continued to get better. Fatigue was reduced by 57 percent and inflammation by between 13-20 percent.

Would you get the same benefits from stretching? It doesn’t look like it. According to the study authors, it’s the unique combination of stretching, breathing, and meditation that makes yoga so beneficial.

“Yoga has many parts to it,” said lead study author Janice K. Kiecolt-Glaser, “meditation, breathing, stretching, and strengthening. We think the breathing and meditation components were really important in terms of some of the changes we were seeing.”

The fact that yoga improved sleep was also believed to be a big part of its benefits. The body repairs itself during sleep, so a lack of quality sleep can contribute to inflammation and fatigue, slowing healing.

If you’re a cancer survivor and would like to try yoga, be sure to find an instructor who has experience teaching survivors. You may have certain limitations because of the treatments you went through, so you want to be sure your instructor can guide you in poses that will help you and not risk injury.

If you’re in Colorado, I highly recommend Laura Kupperman’s classes. In New York City, you can find yoga for cancer classes here. Outside of these areas, research “yoga for cancer” online, or ask your cancer center, doctors, and nurses for recommendations.

I’d love to hear about your experience!

What do you think of this study? Have you tried yoga after going through cancer?