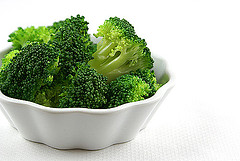 While debate rages over Gardasil, the vaccine designed to prevent cervical cancer in women-and whether or not it does what it’s supposed to do-studies continue to support a natural solution showing promise against the disease: broccoli.

Specifically, broccoli (and similar vegetables like kale and cabbage) contains a compound called indole-3-carbinol (I3C), which has been isolated from the veggie for its anti-cancer properties. Animal studies with DIM, a chemical made from I3C, has stopped the growth of certain cancer cells in animal studies. Other studies have found that it boosts the immune system, activating cells that kill tumor cells. I3C has also been found to combat breast cancer by converting a cancer-promoting estrogen into a more protective variety. In addition, a 2004 study found that women who consumed broccoli were less likely to get breast cancer.

But broccoli can do even more. A 1999 study showed that I3C prevented cervical cancer in mice, as well as reducing skin cancer. And in 2000, Gynecologic Oncology published a double-blind placebo controlled trial in which one-half of women with biopsy-proven early stage cervical cancer had complete regression of their cancer, while none of the control group did. In other words, by supplementing once daily with I3C, 50% of the women’s cancers were completely reversed. In addition, animal studies show that I3C supplements in animals prevented cervical cancer, and also prevented it in their offspring.

In 2005, researchers in South Wales started a new study that will involve 3,000 women who have had a mildly abnormal pap spear test result or two borderline smears. The study is using a dietary DIM supplement that contains the DIM equivalent of two whole cabbages. Women are taking two capsules every day for six months, or a placebo. As far as we could find, this study is still underway, and should tell us even more about the potential of this vegetable-based chemical.

Unfortunately, so far, the attention over Gardasil has left natural compounds such as I3C virtually ignored by the medical community. According to Kerri Knox, RN, writing for naturalnews.com, “…it would be far safer, less expensive, and likely more effective if public health campaigns were directed at teaching women the benefits of eating foods like broccoli and cabbage that are naturally rich in anticancer compounds like I3C.”

The good news is that you can take advantage of this powerhouse nutrient now-by incorporating more broccoli into your daily diet. Recipes, anyone? Get started with allrecipes.com and broccolirecipes.net.

Have you added more broccoli to your diet? Please share your favorite recipes.