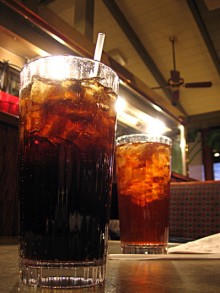 Two Sodas Too Much

Mom may have told you to drink milk or water instead of sugar-laden soda, and she was right. Scientists say too much sugar can weaken our defense systems. According to the American Journal of Clinical Nutrition, studies done in 1973 and 1997 linked sugar intake to a suppressed immune system.1

When you’re going through treatment for cancer, you want to do everything you can to help your body fight and kill cancer cells. Your immune system runs your internal army, and its only fuel is what you eat and drink. Research shows that sugar puts that army to sleep, so to speak. For example, downing 75-100 grams (about 20 teaspoons of sugar, or the amount in two average 12-ounce sodas) can suppress the body’s immune responses-for up to five hours after ingestion!

What’s frightening is that for many of us, drinking two sodas a day has become habit. We hardly think about it. If we go out to eat, we often order it. At the movies, we drink it. At home, we snack on it. According to the U.S. Department of Agriculture, Americans now drink three times the amount of carbonated beverages they did in 1947. And don’t think you’re off the hook if you’re drinking diet-it has its own negative affects on health.

Plus, think about it. If you’re drinking 300 calories of carbonated sugar water, that’s 300 of what nutritionists like to call “empty” calories. They’re doing nothing for you. No vitamins and minerals, no cancer-fighting antioxidants. Since they don’t come with their own nutrients, they pull from the body’s store to break down in your system. Your army is further depleted of the tools it needs to fight. And since you can only eat so many calories a day (and stay healthy), you’ve just missed an opportunity to load up on foods rich in the vitamins and minerals that can make so much difference to your healing process.

Here’s some motivation from nutritionist Joy Bauer: give up 20 ounces of soda a day, and after a year’s time, you’ll have saved 7,280 teaspoons of sugar!

So what to drink instead? Try herb tea, skim milk, soy milk, low-fat hot cocoa, or plain or flavored seltzer. Water is a great alternative. It’s filling, and can fool your body into getting past that craving, say nothing of all the other beneficial effects, like flushing toxins out of your system. Add a little lemon to give it some taste.

Another great idea is exercise. Take a turn around the block or spin away a few calories on the treadmill. Even a short walk can release feel-good endorphins and give you an immediate pick-me-up.