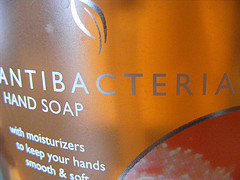 Toxin Alert: Triclosan-“Antibacterial” Not as Protective as You Think

Super bugs-those resistant to common antibiotics-have become a serious concern over the last decade. “When antibiotics are used for non-bacterial illnesses, or when prescriptions are not taken for the full cycle, the bugs that endure pass on their drug-resistant traits to subsequent generations,” says livescience.com.

Faced with the possibility that our current arsenal of antibiotics may not always defeat disease, we’ve become even more concerned about avoiding germs. The recent swine flu epidemic hasn’t helped. We all know hand washing is key to avoiding infection, so we wash often, and not just with warm water and soap-with antibacterial soap. We believe the “antibacterial” will better protect us against the germs, but what science is discovering is not only do antibacterials give us a false sense of security, but they’re polluting our environment and may have a superbug backlash of their own.

Most soaps that boast germ-killing powers (about 75%) contain “triclosan,” an ingredient that kills bacteria, but has no effect on viruses. Since most common illnesses like colds and flus are caused by viruses, antibacterial ingredients don’t prevent them, so we’re not really protected as much as we may think. In fact, an advisory panel of the FDA reported in 2005 that there was no evidence that antibacterial products protected people any better than regular soap. A subsequent study from the University of Michigan agreed.

Triclosan is also causing a lot of concern for personal and environmental health. It’s chemical structure is remarkably similar to dioxin-a class of super-toxic carcinogenic chemicals formed as by-products of the manufacture of chlorine-containing products. This similarity could lead to contamination of triclosan with dioxins, according to the Washington Toxics Coalition. A recent study already found that when triclosan was exposed to ultraviolet light, a type of dioxin formed. Besides the dioxin fear, triclosan has already found its way into human breast milk and urine, and has shown to be an endocrine disruptor in tests on animal and human cells.

Environmentally, triclosan and triclocarban (an ingredient in antibacterial bar soaps, deodorants, and toothpaste) is already accumulating in soil. According to Johns Hopkins research, about 75% of these chemicals that are flushed down our drains survive treatment at sewage plants and end up as sludge spread onto farm fields. Most of these fields do not produce food crops, but the debate as to the safety of this practice continues. “The bottom line,” says Rolf Halden, assistant professor at John’s Hopkins’ Department of Environmental Health Sciences, “is that we’re mass-producing chemicals in the environment that are not helpful and potentially are harmful.”

Antibacterial soaps contain other harsh chemicals as well, like alcohol, “quats” (which can cause skin or eye burns), and phenylphenols, which are possible carcinogens. And the fact that we’re using them so much could also lead to new superbugs. “Many public-health professionals fear that too much use of antimicrobials, especially in the uncontrolled home environment, may result in germs resistant to these chemicals,” says the Washington Toxics Coalition. “Triclosan is thought  to cause a similar resistance to develop because…its use is becoming so widespread.” Do we really need to be exposing ourselves-and our environment-to all these chemicals when natural soap and hot water do just as well?

“Manufacturers of products containing triclosan and triclocarban should consider providing cautionary labels,” says Dan Chang, professor emeritus of civil and environmental engineering at UC Davis. “There are new health-related data on these chemicals that consumers should know about, even if the research is in its early stages,” Chang said.

There are lots of options out there for hand soaps. Look for “organic” and “natural” on labels, and try brands like Weleda, Tom’s of Maine, and Saffron Rouge. For a great alcohol and triclosan-free hand sanitizer, try Clean Well, which is proven to kill 99% of germs naturally.

Have you made the switch to non-anti-bacterial products? Please share your experiences.

Photo courtesy of serenitypno via Flickr.com.