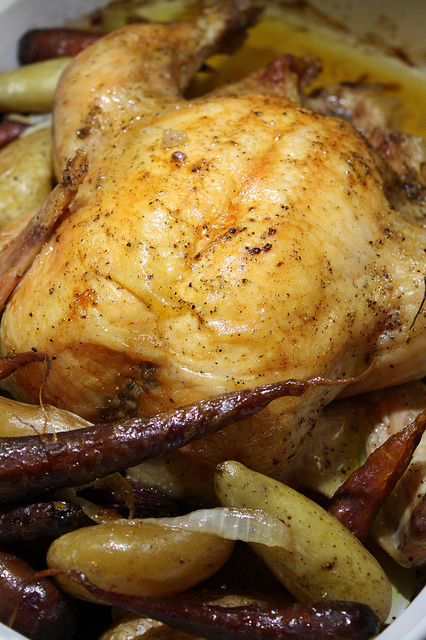 Did you hear the recent announcement by the Food and Drug Administration (FDA)? They said that some chicken meat may contain small amounts of arsenic-arsenic! The agency stressed that the amount is too small to be dangerous, but arsenic is a cancer-causing chemical, classified as highly toxic to humans. Should we be okay with any amount of it in our food?

A naturally occurring mineral found in soil, rock, and water, arsenic is all around us. It’s used to make metals, glass, electronic components, and wood preservatives. It’s also used in herbicides and pesticides, and according to the Environmental Protection Agency (EPA), it’s been linked to cancer of the bladder, lungs, skin, kidneys, liver, and prostate.

So how did this mineral get into chicken meat?

A new study conducted by the FDA found that an ingredient in chicken feed called Roxarsone, which contains arsenic, can leave a small amount of toxic arsenic in the body of the chicken, where it stays until we eat it. Now there are several things disturbing about this study result.

Number one, why are chickens being fed feed that’s laced with arsenic? I checked out “Roxarsone,” and surprise, surprise, guess what it is? A growth-promoting ingredient! Can’t we just let feed animals grow naturally? Apparently not. Roxarsone has been approved by the FDA for decades for use in chickens, turkeys and pigs to increase weight gain, decrease the risk of parasites, and improve “pigmentation,” or skin color, so it makes the meat look more red.

Number two, the FDA has always known that Roxarsone contained arsenic. They just didn’t feel it was a safety concern to humans. The American Meat Institute differentiates “organic” arsenic from “inorganic” arsenic, because there’s a chemical difference between the two. Though both are found naturally in the environment, organic arsenic is not considered carcinogenic, while inorganic is more plentiful, more toxic, and can cause cancer. Roxarsone used organic arsenic, which was assumed to be safer, but guess what? When metabolized in the chicken’s bodies, the organic arsenic turned to inorganic arsenic. The FDA’s deputy commissioner himself said the recent study raised “concerns of a very low but completely avoidable exposure to a carcinogen.”

Number three, Roxarsone was approved by the FDA in 1944 for use in animal feed. That means that any of us eating chicken since that date have probably been exposed to the small levels of arsenic that made it into the chicken we ate. Not a comforting thought. Up until now, the FDA maintained that the arsenic was excreted in the chicken’s feces, while several environmental groups, lawmakers, and concerned citizens have tried to force a ban on the product. Only recently did the agency admit, as a result of this study, that some toxic arsenic remains inside the chicken.

The good news? As a result of the FDA study, Roxarsone manufacturer Pfizer Inc. said it would pull the ingredient off the market. Many poultry producers had already stopped using it. But there are other similar products out there. My takeaway? Be careful what you buy! Purchase any of your meat from distributors committed to raising animals without chemicals. Look for certified organic labels, as well as other statements such as “antiobiotic free,” and do some checking on the brand. Every little bit helps reduce your toxic exposure.

What do you think about this FDA announcement? How do you make sure your meats are safe to eat?

Photo courtesy the Sarah B in SD via Flickr.com.