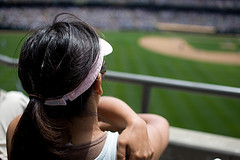 The Safest Sunscreen for Cancer Fighters-The Evidence is In

Cancer treatments cause sun-sensitivity. It’s a fact. So in addition to your regular routine of skin protection, you need to be extra vigilant if you’re going through chemotherapy or radiation. However, all sunscreens aren’t created equal. Which is the best for sensitive skin?

Basically, we have two camps in the sunscreen world-the chemical and the physical. The story has been that physical sunscreens (or so-called mineral, which include titanium dioxide and zinc oxide), reflect or scatter UV radiation before it damages skin.

They’re reputed to offer broader protection against both UVA and UVB rays, but are sometimes more visible (as a white or colored cream).

Chemical sunscreens, on the other hand, absorb UV rays and chemically alter them to decrease their damaging effects. (These include oxybenzone, PABA, octyl methoxycinnamate, salicylates, avobenzone, and menthyl anthranilates.) They usually vanish on the skin (don’t leave a white residue) and are more cosmetically appealing for that reason. They have been shown effective against UVB rays, but not so much against UVA rays, though some manufacturers are trying to change that.

We can continue to use these definitions for simplicity, but we have to note that according to an article by Erik Kreider of Kabana Skin Care (and published on soap-wire.com), it’s not “entirely” true to say that physical sunscreens block UV only by scattering and reflecting UV radiation. In fact, they also absorb UV radiation, but with a “broader, effective range. They look white because indeed these minerals do reflect and scatter light in the visible spectrum, which we can see. Unfortunately, manufacturers, dermatologists, and the media, regularly perpetuate this myth because they don’t understand the physical chemistry associated with these minerals and make the easy yet incorrect assumption that they perform the same in the UV as in the visible spectrum.”

In other words, physical sunscreens absorb UV rays as well-they just offer better protection. Kreider goes on to say that zinc oxide is a better sunscreen than titanium dioxide, as it has a broader UVA absorbance and is safer from chemical damage.

So which one should you choose? Here are more facts for you to consider. First: as reported above, physical (or mineral) sunscreens protect against a broader range of UV rays, which is important, as it’s the UVA rays that penetrate more deeply into the skin, and may be more to blame for skin cancer. Second, only one chemical sunscreen (Avobenzone) is legal in Europe. They’ve banned the rest. Why? Because chemical sunscreens have three primary defects: 1) they generate free radicals that can damage cells, 2) they can contain estrogenic (hormone-altering) chemicals, and 3) they contain synthetic chemicals that can be toxic. In fact, benzophenone is used in industrial processes as a free-radical generator! And according to a study in 1998 by Dr. John Knowland of the University of Oxford, certain sunscreens containing PABA damaged DNA in test-tube experiments.

Is it only coincidence that the greatest rise in melanoma has been in countries that heavily promote chemical sunscreens?1

Bottom line-with the information we have now from science, physical or mineral sunscreen is safer for you, whether you’re going through cancer or not. If you want to get more specific, go for zinc oxide. As Kreider says, “Zinc oxide is the safest sunscreen on the market and the only one you should be using on your children.”

Do you have a favorite zinc-oxide sunscreen? Tell us about it!