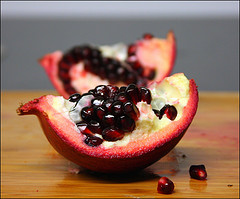 The Cancer-Prevention Power of Pomegranate

What fruit can trace its history to Biblical times, Greek mythology, Arab caravans, Indian ceremonies, Jewish customs, and the Muslim Qu’uran? The seeded apple, as the Middle French called it, or as we know it, the pomegranate. Ancients used the skin and bark for medicinal purposes, but only the seeds are edible, and today, scientists are finding many health benefits from eating those seeds, even a protective effect against cancer.

At the basic level, pomegranate seeds are rich in vitamin C and potassium, and loaded with potent antioxidants like polyphenols, tannins, and anthocyanins that protect the health of cells. The fruit extract demonstrates a higher antioxidant activity than even green tea. Researchers have found drinking pomegranate juice can help increase blood flow to the heart muscle of patients with coronary artery disease, may protect against Alzheimer’s disease, and may help lower cholesterol. Meanwhile, it’s potential against cancer continues to grow. Here are a few of the study results:

• In a study published in Clinical Cancer Research (2006), men who had been treated for prostate cancer but whose PSA levels were still rising drank 8 ounces of pomegranate juice per day for 33 months. During the study, the rate of increase slowed in 83% of the men, and in 15%, it actually decreased.
• Researchers from the University of Wisconsin reported that pomegranate extract inhibited skin tumors in mice.
• Israeli researchers found that pomegranate seed oil encourages breast cancer cells to self-destruct. Dr. Lajob Pusztai, assistant professor at the M.D. Anderson Cancer Center in Houston, says the study “…provides a potential new avenue to develop anti-cancer drugs from a natural compound.”
• A study at the University of Wisconsin-Madison showed that consuming pomegranates could potentially help reduce the growth and spread of lung cancer cells, or even prevent lung cancer from developing.

How can you best get this health powerhouse into your diet? The easiest way is to buy pomegranate juice-look for quality brands with a high percentage of juice and low percentage of sugar, though because of the fruit’s tartness, you will probably need some sugar for taste. Another fairly easy way is to get some grenadine syrup, which is made from pomegranates and used to add flavor to cocktails, but you can also use it over ice cream and in marinades. (If you want to make your own pomegranate syrup, here’s a recipe.) Getting into the fruit itself can be a challenge for newbies, but it’s more economical than buying juice, so it may be worth some red fingers. Find instructions on how to cut open the thick skin here.

Do you have a favorite pomegranate recipe? Please share it with us!