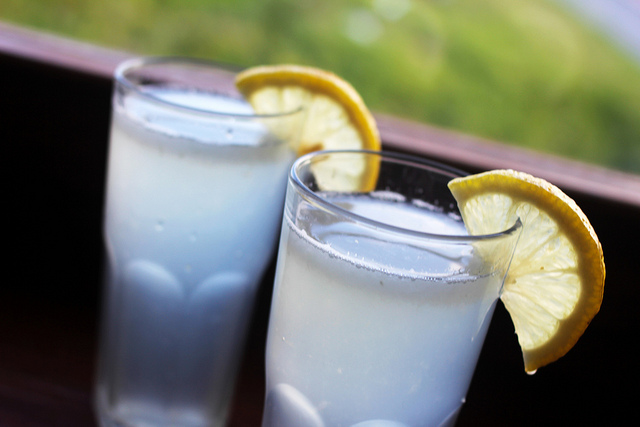 When 2012 began, I dedicated the year to my health. As the months went by, I made several changes that I have to say, are making me feel a lot better. I feel mentally clearer and I have so much more energy and room to expand toward the things I want in life. It’s all a process, though. Changes don’t happen overnight! But every little step counts.

I am continuously asked what I have done from what I eat to how I exercise to what products I use on my body and in my home. So here they are-my top 10 changes that have made the most impact in my life this year!

I know, I know. You think you need it to get going in the morning. And to be honest, coffee can be good for you, as it has beneficial antioxidants. I’m sensitive to the caffeine, however, and found that instead of benefitting me, the coffee was just making me feel jittery, on edge and at times, unable to relax. It is also acidic, which can be hard on your digestive system, it’s taxing to your adrenal glands, and it can stay in your system for a long time, disturbing sleep. So last January, I gave up the occasional latte for good. I feel 100 percent better without it. Read more on my post on how to quit coffee for some helpful tips.

For over a year now, I haven’t had white processed sugar. That includes anything white that is quickly converted into sugar (glucose) in our systems like bread, pasta and white rice (I have sushi occasionally, but not nearly as often as I used to). I decided to give up agave as well, as it’s over 80% fructose. Kimberly Snyder, author of The Beauty Detox, talks about this on her blog.

Then I gave up honey, and now my sources of sugar are fruits, especially berries, apples, and grapefruits, plus Stevia, the natural sweetener. Think it’s impossible? It’s not!

Studies show that sugar, in various forms, is extremely addictive. I wrote about this in another post, where I shared the fact that animal studies have shown that rats who binged on sugar later exhibited withdrawal symptoms. Jeff O’Connell, editor-in-chief of Bodybuilding.com, stated that sugar speeds along the same brain pathways as heroin does. So your sugar cravings are likely very real.

Sugar also expands our waistlines, creates mood swings, and causes the body to release hormones that can promote inflammation and inhibit the body’s defenses against disease.

It wasn’t easy at first. I tried to stay away from it a few times and always would return to it. What’s helped me most is to not have it at all. Complete cold turkey. Once I was off for a few weeks, it got easier, as I felt better. The better we feel when we get rid of some of these drug-like foods, the more we want to feel better. Remember, it’s a progression. You don’t have to go cold turkey like me if it doesn’t work for you. Just try cutting back on one soda, or one cookie, or one teaspoon of sugar in your tea.

My doctor, Frank Lipman, was the first person to tell me to stay away from soy. According to him, soy can weaken thyroid function. Soy has substances called “goitrogens,” which according to several studies, can slow thyroid function, and in some cases, trigger thyroid disease. Science isn’t sure yet how much soy per day might be harmful, and in what populations (certain people may be more at risk), but for me, it made sense. Much of the soy available in the U.S. also comes from genetically modified crops, and can be additionally processed. My thyroid is sluggish (so I found out this year), so I made the change to stay away from soy. I’ve been a huge fan of steamed soy milk since I gave up coffee, so again, this wasn’t easy.

Once you start to stay away from one thing (sugar), however, and find that you feel so much better, cutting out a second thing becomes much easier. I preferred the alive, energetic feeling I had when I stopped consuming these things than the foggy and jittery way I felt while they were in my daily life.

4. One Smoothie a Day

I love green smoothies, and I especially love the recipe on Kimberly’s site. It’s an easy, fast, and tasty way to add a lot of green veggies to your daily diet, like spinach, romaine lettuce, and celery, along with fruits like apples, pears, and bananas. Yummy, and so good for you! Another smoothie I love is Dr. Frank Lipman’s pea protein powder, “Sustain,” with berries, ice and almond milk. Obsessed!

I’ve always loved exercise, especially competitive types like running, but this year I found that my usual hard-core routines were leaving me feeling depleted and tired instead of energized and invigorated. I started practicing Vinyasa and Kundalini yoga at least 3-4 times a week, and it’s changed my life! And who says you can’t get toned and fit from Vinyasa? I have! I now run occasionally in Central Park, as well, as a way to connect to nature and get some fresh air, but yoga is my main focus.

6. Drink Hot Water and Lemon First Thing in the Morning

Dr. Lipman recommends this drink as a replacement for coffee. It’s a simple cup of hot water with half a lemon squeezed into it. It’s hydrating, full of antioxidants, and helps alkalize your body, to reduce the risk of inflammation. It also helps the liver get rid of toxins, so a perfect start to the day, especially is you suffer from blemished skin.

Except for the occasional raw goat cheese, I stay away from dairy. Why? It can be detrimental to health, first of all, because a lot of dairy cows are fed the wrong kind of food. Instead of their natural diet of green grass, they dine on soy, corn, cottonseed meal, and other commercial feeds, which contain things like chicken manure and pesticides. Most are also given antibiotics and hormones. The milk is pasteurized, which kills bacteria, but also destroys enzymes, vitamins, and proteins. Some milk is “ultra-pasteurized” in ultra-high temperatures. It’s also homogenized, which breaks down the butterfat so it doesn’t rise to the top. This makes it harder to digest, though, than normal, and can trigger inflammation.

After I told Dr. Lipman all my symptoms, which included feeling stressed and fatigued and not sleeping well at the beginning of last year, the first thing he told me was to stay away from gluten. He said gluten is the devil!  “Wow, it must be sugar’s cousin,” I said!

Gluten is a type of protein found in grains like wheat, rye, barley, couscous, and oats. For some people, it can cause an immune reaction or celiac disease. Many other people, though, even if they don’t have celiac disease, may find gluten hard to digest. It can also encourage inflammation, which can lead to arthritis, heart disease, and other issues. I have never felt better. The bloat is gone and the fogginess has disappeared.

Did you know that some foods enhance the digestion and absorption of others? The science of combining foods for optimal benefits is something we instinctively have always done. Through my sanctuary at LYT NYC, I learned about which combinations are healthiest for me and my colon, but I have never fully put them into place until this year.

Some of the basic rules, for example, include eating proteins only with vegetables, eating fats and proteins at separate meals, and eating fruits alone. These tips help the body more easily digest your foods and optimize the nutrients getting into your cells. Also, take enzymes with every meal to help digest your food. My favorite is Dr. Morter’s Super Digest, which you can purchase at LYT.

Magnesium oxide is a naturally occurring mineral, important for many systems in the body. It promotes hydration and the healthy functioning of the heart and kidneys, and also has a calming effect. Here’s something cool, though-it also can be used as a way to keep you regular without affecting your colon (like laxatives can). I started taking this every night for smooth digestion and I am amazed!  My favorite brand is MAG 07!  Take 1-2 per night and VOILA!

Have you made changes in your health in 2012 that have made you feel better? Please share!