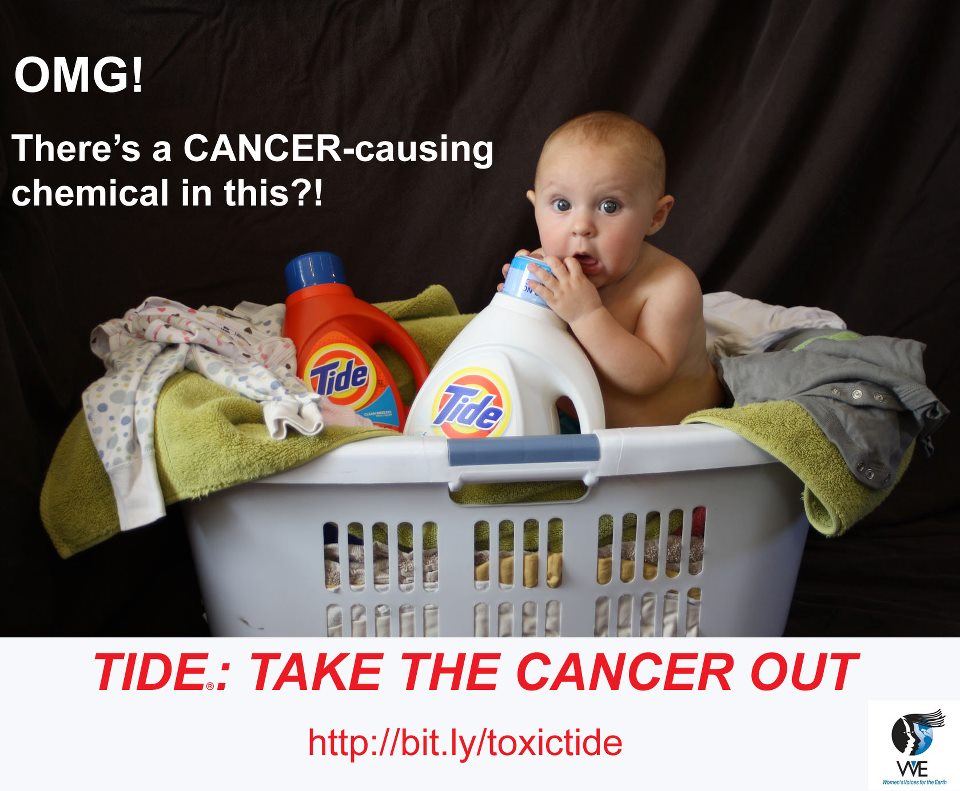 Tell Tide to Get the Cancer-Causing Ingredients Out! 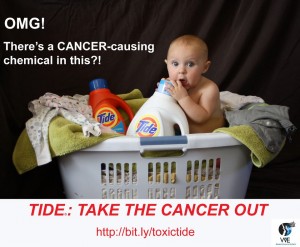 Our friends at Women’s Voices for the Earth (WVE) are trying to get the word out-that Tide laundry detergent contains a cancer-causing ingredient. Even Tide Free & Gentle has it, and that’s the detergent marketed to moms of young children as being supposedly safe for baby skin!

WVE is asking everyone to put the pressure on Tide to make a change. They’ve posted this picture of baby Emma on their website and on a dedicated Facebook page to let parents know that this detergent is not 100 percent safe for babies or small children.

The suspect ingredient? It’s 1,4-dioxane, a chemical by-product that’s a known animal carcinogen and is classified by the Environmental Protection Agency as a probable human carcinogen that penetrates readily into the skin.

The Dangers of 1,4-Dioxane

Unfortunately, you won’t find 1,4-dioxane listed on the label of any product, particularly not a laundry detergent. That’s because it’s formed during the manufacturing process, typically when ethylene oxide is added to sulfates to soften them.

The Campaign for Safe Cosmetics tested children’s bath products and found that 82 percent contained at least 54 parts per million of formaldehyde and 1,4-dioxane. The thing is, our exposure to this dangerous chemical is totally unnecessary.

“There is absolutely no reason why manufacturers can’t remove hazardous chemicals in products being applied to babies’ bodies every day,” said Jeanne Rizzo, R.N., president and CEO of the Breast Cancer Fund. “Children are exposed to toxic chemicals from many sources. We need to protect them from these kinds of repeated, unnecessary exposures.”

In 2011, WVE sent 20 different cleaning products out to an independent lab to find out what they contained, besides the ingredients listed on the label. The result? Both Tide Original Scent and Tide Free &Gentle contained 1,4-dioxane. Alexandra Scranton, director of science and research for WVE, agrees that it’s relatively easy to get rid of.

“It’s a contaminant from using things like sodium laureth sulfate, not something they add intentionally,” she says. “But it is a fairly expected contaminant. There are certain things that you do you know you’ll get 1,4-dioxane with, and there are fairly easy things you can do to make sure you don’t get it.”

Tide manufacturer Proctor & Gamble stated to the press that levels of 1,4-dioxane found in its products are well below currently accepted safety standards, and that it does not plan to reformulate its detergents.

“1,4-dioxane is pretty common in our environment in general, it’s found in food, drinking, water, air, and in a wide range of consumer products, from shampoo and body washes to cleaning products,” said Suzette Middleton, a spokesperson for Proctor & Gamble. “It comes in as a trace contaminant or a byproduct developed in the process of making these products. With the amount that we know is in our laundry products, you would have to wash and wear over 1,000 loads of laundry every day to approach the safety levels set by various organizations and regulatory agencies.”

Concerned citizens, however, aren’t satisfied with this response.

Will a Lawsuit Change Things?

Activist Group As You Sow has filed a lawsuit against Proctor & Gamble over Tide products. California law classifies 1,4-dioxane as a known human carcinogen, and As You Sow is demanding P&G label its products with warnings about 1,4-dioxane and its carcinogenic properties.

The company reformulated its Herbal Essences hair products to remove the contaminant in 2010 following a public outcry. Yet so far, even with a product like Tide Free & Gentle, which was thought to be a healthier choice for babies, P&G has stated it has no intention of reformulating.

“People are outraged because they feel deceived,” said Erin Switalski, executive director of Women’s Voices for the Earth. “They bought this product because they thought it was a healthier choice. They wouldn’t have purchased it if they knew there was a carcinogen in it.”

“No ‘safe’ level exists for 1,4-dioxane in consumer products-and the range of health hazards extend beyond cancer,” said Dr. Anne Steinemann, Professor of Civil and Environmental Engineering and Public Affairs at the University of Washington, and Visiting Researcher at the University of California San Diego. “Much more work needs to be done to improve the safety of cleaning products, including those claiming to be green or hypo-allergenic.”

Obviously, P&G thinks they can continue to formulate their products with known carcinogens and we will continue to buy them. It’s time we changed that thinking! And if you think your actions don’t matter, think again. After all, Johnson & Johnson recently announced plans to get rid of formaldehyde, phthalates, and other harmful chemicals from its products by 2015. Why not P&G?

If you want to help, take these action steps:

What do you think of P&G’s statement? Will you continue to buy Tide?