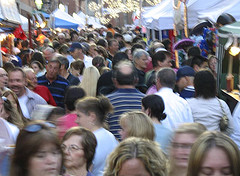 Studies Show: All of Us, Including Our Wildlife, are Full of Toxic Chemicals

It’s not a comforting idea to think that we’re all walking around with a myriad of synthetic chemicals in our bodies. But science is showing that we’re doing just that.

Writes Dixie Mills, MD, for Women to Women: “Recent studies of small groups of diverse volunteers (men and women) in Europe, the U.S. and Canada showed that everyone, including the chief of a remote indigenous tribe in Northern Quebec, had one characteristic in common: without their knowing, their bodies had absorbed a complex chemical cocktail of dozens of different synthetic substances.” The most worrisome of these, Mills goes on to say, are the endocrine disruptor chemicals (EDCs), the ones that mimic the action of hormones when absorbed by humans and wildlife.

This isn’t anything new. Back in 1995, a multidisciplinary group of international experts got together for a work session on EDCs, because of the growing concern that the problem could have major economic and societal implications. “Research since 1991 has reinforced concerns over the scope of the problems posed to human health and ecological systems by endocrine-disrupting chemicals,” the experts said in a statement. “New evidence is especially worrisome because it underscores the exquisite sensitivity of the developing nervous system to chemical perturbations that result in functional abnormalities.” The experts agreed that EDCs undermine neurological and behavioral development, are found across all continents and oceans, and can be passed from generation to generation.

If we’ve known this for nearly 20 years now, why hasn’t more been done? Most reports state that since nearly everyone is exposed to these chemicals, it is difficult to conduct studies to determine what is normal. Lack of funding has constrained testing, and resulting abnormalities-like behavioral and neurological changes-can be difficult to evaluate. Finally, trade secret laws give manufacturers the ability to keep secret the ingredients in many of their products, which means consumers and public health authorities are left in the dark as to what can be tested.

It’s not just humans who are being affected. Studies on brown trout in Colorado found that populations in streams polluted with heavy meals showed evidence of endocrine disruption, with reduced liver size, immune system disturbance, and reproductive alterations. The Center for Community Action and Environmental Justice in California lists many other examples of endocrine disruption, including herring gulls who formed same-sex pairs and abandoned their eggs, eagles who neglected their young, still-born lambs, 700 bottlenose dolphins dead along the Atlantic seaboard, and harbor seals who had high levels of PCBs and DDT in their tissues. (PCBs And DDT have been banned from sale in the U.S., but PCBs can still be found in transformers and capacitors, and DDT is still manufactured for sale overseas.)

What can you do to help protect yourself and your loved ones? Avoid products with EDCs as much as possible, including plastics made with bisphenol-A (use stainless steel water bottles and glass ceramic to heat food in the microwave). Avoid phthalates in your plastics and personal-care products; purchase shampoos and skin care that don’t contain parabens; buy organic produce, dairy, and meat (raised without antibiotics or growth hormones); thoroughly wash fruits and vegetables to reduce contamination with pesticides; and avoid pesticide use in your home. Finally, support efforts to bring this concern to government attention.

“A trivial amount of governmental resources is devoted to monitoring environmental chemicals and health effects,” say the experts from the aforementioned work session. “The public is unaware of this and believes they are adequately protected. The message that endocrine disruptors are present in the environment and have the potential to affect many people over a lifespan has not effectively reached the general public….the potential risks to human health are so widespread and far-reaching that any policy based on continued ignorance of the facts would be unconscionable.”

Do you have other ideas for spreading the word about EDCs? Let us know.