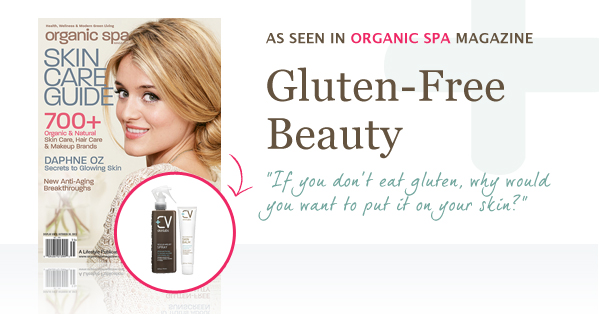 At the beginning of the year, I talked about 10 changes I’ve made in my life that have given me more energy, mental clarity, and even clearer skin. One of those changes was eliminating gluten from my diet. I was feeling stressed, fatigued, and having trouble sleeping, so my doctor-Dr. Frank Lipman-suggested I stay away from gluten. I followed his advice and I feel a lot better.

You’ve probably heard about the gluten-free diet. Many Americans have decided to avoid this protein either because they have celiac disease and can’t digest it, or because they’re sensitive to it and have other symptoms, like I did.

You may have some friends or family members who have made the same change. Should you go gluten-free too? If so, what about your personal care products? Some have gluten. Should you avoid them?

What is a Gluten-Free Diet?

A gluten-free diet excludes the protein gluten, which is found in grains like wheat, barley, rye, and triticale (cross between wheat and rye). The diet was originally used only for people who suffered celiac disease-a disorder that triggers an immune response to gluten.

People with celiac disease suffer from inflammation in the small intestine when they eat foods that contain gluten. The immune system mistakenly sees the protein as a dangerous invader, and attacks, damaging the intestine and causing symptoms like weight loss, bloating, diarrhea, malabsorption of nutrients, stomach pain, and other problems.

Today, however, it’s not only those with celiac disease that are avoiding gluten. Some people have what’s called a “non-celiac gluten sensitivity” that causes intestinal discomfort when they eat gluten. Others have a wheat allergy, which can make it uncomfortable to consume gluten products.

More recently, the gluten-free diet has become popular with people who want to lose weight, clear up their skin, and improve their overall health. Though there’s nothing wrong with gluten-in fact, it can provide a healthy source of protein-many people say they feel better when they’re not eating it.

Doctors warn that symptoms like regular bloating, abdominal discomfort, vomiting, diarrhea, constipation, fatigue, brain fog, and aches should be reported to a medical professional. These symptoms could be signs of other problems besides gluten sensitivity, including irritable bowel syndrome, a bacterial infection, or lactose intolerance. A doctor can test you for celiac disease, after which you can make better decisions depending on whether or not you have it.

Once you’ve seen a doctor and ruled out any other problems, you can try a gluten-free diet if you want to. Be warned, however-it can be difficult to completely cut gluten out. Many foods are cross-contaminated with those that contain gluten. You can definitely cut back, however, by eliminating wheat, barley, rye, and triticale, as well as foods like the following (unless they’re labeled “gluten-free”), and see if you feel better:

If you decide to go gluten-free, what about your personal care products?

Turns out that many contain a form of gluten. For those who are sensitive to it, gluten can cause problems if you accidentally swallow it. Those with celiac disease or serious sensitivities may want to avoid toothpastes, lipsticks, and mouthwashes that contain gluten.

Some people with celiac disease develop dermatitis, which causes an itchy, blistering rash. Linked to gluten intolerance, the rash is caused by the ingestion of gluten-not the topical application of it. At least that’s what the science tells us so far.

Sheila Crowe, M.D., gastroenterologist and professor of medicine at the University of California in San Diego, told Oprah.com, “There’s absolutely no evidence that using a topical product that contains gluten will cause a problem.” Other research shows that the gluten molecule is too big to pass through the skin to the bloodstream. People with allergies to wheat, however, can still suffer effects from topical application. Companies are now producing gluten-free beauty products to meet the needs of those who would rather not apply it to their skin and hair.

Valerie Monroe, “Gluten-Free Beauty: Should You Be Concerned with What’s In Your Products?” Oprah.com, February 15, 2012, http://www.oprah.com/blogs/Gluten-Free-Beauty-Should-You-Be-Concerned-with-Whats-in-Your-Products.