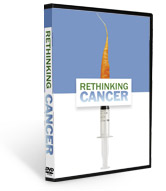 Have you heard about this film? It’s a new documentary, sponsored by the Foundation for the Advancement in Cancer Therapy (F.A.C.T.). It follows the lives of five men and women who used biological therapies to overcome serious illness. Definitely caught our attention!

According to the F.A.C.T. website, four of these people had been diagnosed with cancer, and the fifth with a severe case of Lyme disease. All have outlived their diseases, between 15 and nearly 40 years so far. They are part of a group of survivors who sought guidance from Ruth Sackman, past-president of F.A.C.T., and her book, Rethinking Cancer, published in 2003.

Amazon reviewer Gordon Ledford says of that book, “Traditional medicine offers three choices: Surgery (I had 57 “places” removed before I said, ‘Enough is enough!’); Chemotherapy (who really benefits from a destroyed immune system?); and Radiation (which actually CAUSES cancer). I highly recommend this book plus The China Study by Collin Campbell. These two books have changed my life for the better. I am healthy once again, I have more energy than when I was in my 30’s, I sleep better (the body heals, primarily, during restful sleep), and I enjoy life with no fear of cancer any longer.”

Another reviewer from Maryland agrees: “Ruth Sackman is among this century’s most diligent and authentic health pioneers swimming against the tide to get the word out that cancer is a degenerative disease at whose root is a sick immune system that just said, ‘OK, I quit.’”

Sackman doesn’t strive to go against the advice of physicians. In fact, she advises readers to work with a qualified doctor to manage their illness, but to include nutritional and immune-boosting therapies. The new documentary takes alternative therapies a step further, examining the lives of those who sought out other ways of dealing with their illnesses, some after conventional therapies failed, and some after surgery or diagnosis. It includes an interview with Sackman, as well as disscussions with two physicians (one an oncologist) about the results experienced by the people documented. Types of cancer covered include renal cell carcinoma, breast cancer, and bone and lymph cancer.

What is F.A.C.T.? According to their site, a non-profit organization that supports non-toxic, biologically sound approaches to cancer prevention and treatment. “F.A.C.T.’s goal is to educate practitioners and patients about a different concept of cancer and other chronic degenerative disease in the hope that the public will gain an understanding of all viable medical options.” Sackman co-founded the organization after watching her daughter suffer through chemotherapy and eventually succumb to leukemia, and spent nearly 40 years of her life helping cancer patients return to healthy lives. F.A.C.T. advocates a balanced diet of whole, preferably organic foods, detoxification, hormonal balance, stress management, and optimal functioning of all body organs and glands.

The choices these people made may not be for everyone, but they do get you thinking. “Our goal is really to educate the public about alternative cancer treatments,” said F.A.C.T. vice president Jim Oakar. “We want to be a hub of information for people seeking other methods.”

“I’m not anti-medicine,” adds Dr. Sheryl Leventhal, a former New York oncologist featured on the film. “I try to get to the roots of problems and fix the roots.”

If you’re interested in watching this film, you can get it at Food Matters TV.

Have you seen this film? What did you think?