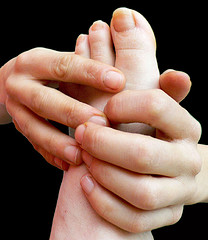 Who doesn’t enjoy a nice foot rub now and then? It’s soothing and relaxing, and can ease aching muscles and joints. However, according to recent studies, a certain type of foot massage-called reflexology-can do a lot more than that. Researchers from Michigan University found that reflexology was the most effective complementary therapy (when compared to scalp massage and self-initiated support) for breast-cancer survivors, reducing depression and anxiety, and increasing quality of life.

This isn’t the first time reflexology has been shown to benefit cancer patients. A British study found that compared to regular foot massage (in which reflexology pressure points weren’t stimulated), reflexology improved quality of life in 100% of the participants, compared to only 33% of the regular massage group. “Not only did the patients in this study enjoy the intervention,” said the researchers, “they were also ‘relaxed,’ ‘comforted,’ and achieved relief from some of their symptoms.”

In Australia, ten minutes of reflexology treatments helped provide cancer patients with relief from pain, nausea, and anxiety. According to the American Cancer Society, a 2003 study found that reflexology helped reduce cancer pain. And a 2007 study found that reflexology given by partners of patients reduced pain and anxiety in people with metastatic cancer. A clinical nurse specialist at the Memorial Sloan-Kettering Cancer Center writes, “Reflexology is ideal for patients with cancer because it is non-invasive, can be performed in any setting, requires no equipment, and does not interfere with patient privacy….I have seen reflexology transform patients from very high anxiety of 8/10 to levels of 2/10 within the course of a single session.” She goes on to quote a study of 1,290 cancer patients in which reflexology was shown to produce a 50% improvement in their symptoms.

What exactly is reflexology? According to the UK Association of Reflexologists, the therapy operates on the theory that following illness, the body is in a state of “imbalance,” with vital energy pathways blocked. Reflexology restores and maintains the body’s natural equilibrium and encourages healing. A reflexologist uses hands to apply pressure to the feet, working on certain points of imbalance to release blockages and restore free flow of energy to the whole body. Pressure may also be applied to the hands and the ears, and is believed to send signals through the peripheral nervous system. Practitioners may use specific pressure points on the feet (similar to acupuncture), which are thought to correspond to certain parts of the body.

Reflexology isn’t only to relieve cancer symptoms-back pain, sports injuries, migraines, digestive disorders, and sleep disorders can all benefit from the treatment. However, if you’re going through cancer treatments and haven’t tried reflexology, now might be a good time. Sessions range from 30 minutes to an hour, and are usually very relaxing, with the potential to relieve symptoms and side effects. Check with your cancer center for alternative therapies, or look to area spas that may offer reflexology as part of their massage services.

Have you tried reflexology? Did it help you with chemotherapy side effects? Let us know.