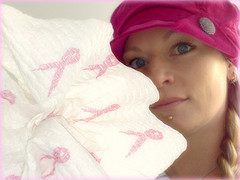 Pinkwashing: Is Your Money Going to Breast Cancer or Big Business?

October’s Breast Cancer Awareness month brings a lot of opportunities to donate to a great cause, but in today’s economy, every penny counts. How can you be sure your money’s actually going to charity or research?

You need to be more careful than you may think. According to the organization Think Before You Pink, there have been a few instances where either a product used to raise money for breast cancer contained ingredients linked with breast cancer (what’s called “pinkwashing,”) or a company marketed pink-ribbon sales, but little-to-no money ever went to breast cancer.

For example, last year, Yoplait was raising money for the fight against cancer, but the product itself was made with the hormone rBGH, which has been linked with breast cancer. (Fortunately, after being asked to stop the hypocrisy, parent company General Mills announced it was going rBGH-free.) Another example: a pink Chapstick costs $2.99, but only 20 cents goes to research-not the best bang for your charity buck.

“If a company is donating 5 cents on a $10 purchase,” says “Bangor Daily News” writer Kristen Andersen, “that’s not exactly reason to go out of your way to buy its BCA [Breast Cancer Awareness] products.”

Think Before You Pink suggests you ask more questions to find out more about how much of your money is going to breast cancer. Robbie Finke, director of marketing for the Breast Cancer Research Foundation (BCRF), says, “We often come across companies that just say, ‘A percentage of this product is going to breast cancer research,’ without specifying the amount or which organization will benefit.” Pink Knot wine is one of those. It costs $10 a bottle, but it doesn’t say how much of that will go to breast cancer.

“It must be really good for business because so many businesses are picking up on the pink-ribbon thing,” said Kasha Ho, program director of California-based Breast Cancer Action, “but not making a huge difference in the breast-cancer world.”

Another thing to think about: the caps. Many companies will place a cap on the amount they will donate, say $10,000. After that amount has been earned, they are no longer under any obligation to donate money from your purchase, but that doesn’t mean they won’t still sell you the product with the pink ribbon on it. According to the “New York Times” (Oct 16, 2002), “Breast cancer has become the poster child of corporate cause-related marketing campaigns, as companies try to boost their image and their profits by connecting themselves to a good cause.”

Fortunately, there are a lot of companies and organizations doing great things during the month of October. Suke Pure is donating 100 percent of sale proceeds of two of their best-selling products to the Think Before You Pink campaign. Target is selling pink pens, t-shirts, and more, with all of the proceeds going to charity. Pick up something from one of these companies, or donate directly to the charity of your choice.

Do you have a favorite safe, top-donating pink product? Let us know!