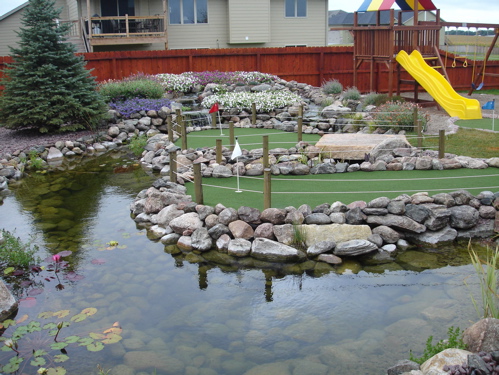 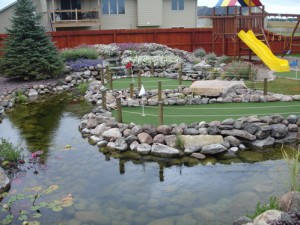 Natural science writer and anthropologist Loren Eisley once said, “If there is magic in the planet, it is contained in the water.” Landscape contractor Nathan Heinert knows this well, but not because of any official study on the matter. He doesn’t have a Ph.D. in H2O. He has, however, spent many hours watching water and nature transform the lives of cancer patients and their families.

“We would finish a landscape project for someone,” Nathan says, “and we’d be cleaning up when they would come home and see the pond or the fountain or whatever we had done for them, and nine times out of ten they’d drop everything to focus on this new space and just be with their families and with nature. Instantly, all their cares were gone.”

Curious, Nathan researched the effect of water and nature on healing, and found “there’s an actual link to the sights and sounds of water and the release of chemicals in the body that act as stress relievers.” He dug into the subject a little more and found that medical communities have started incorporating water into their environments, from artwork on building walls to peace-promoting landscaping around treatment areas. However, he found that most of these spaces weren’t maximizing the potential benefits. “It was more about aesthetics and not enough about how it could really help people to relax.”

Meanwhile, Nathan’s good friend, Bill, was going through cancer. Diagnosed with leukemia only three weeks after losing his 24-year-old son to brain cancer, Bill was fighting hard, and experiencing the usual ups and downs of treatment. “He needed something to take his mind off what he was going through,” Nathan says. Why not a pond in his own back yard? “I wanted to give him a spot where he could just go and be.”

After Bill’s enthusiastic response to the completed project, Nathan started thinking about other cancer patients. “I felt I was being called to find a way to provide this for other people,” he said. A few handwritten notes and a couple meetings later, Nathan had started a foundation called River of Hope. “We had a 30-minute TV show produced and aired on the four-year anniversary of Bill’s diagnosis. From there we started working on ways to keep building.”

Unfortunately, while River of Hope continued to grow, Bill contracted a serious infection, from which he never recovered. A few weeks before passing away, he encouraged Nathan to hang onto his dream. “He told me-‘You have to keep doing this. It’s the only thing that gave me peace in my last few weeks.’”

Bill’s words encouraged Nathan to work even harder providing natural retreats for cancer patients. So far, he’s planning six new projects in his hometown of Sioux Falls, South Dakota, and hopes to eventually expand from residential areas to community parks that incorporate nature, water, and other forms of integrative medicine. “We want to raise awareness about this disease,” Nathan says, “and how it affects not just patients, but everyone in their lives-families, friends, and communities.”

Nathan says he’s found it particularly rewarding how, even after a cancer patient has passed away, the family still gathers around the ponds and fountains to share memories and quiet moments. “I would go over to see how things were going and they would just be sitting out there talking about memories, using it as a gathering place for their own healing. It’s just so powerful. It goes beyond what I ever thought it could be. For the patients, it’s a way to escape and reflect on what they’re going through. For the families, it’s a way to connect.”

If you have someone you think would benefit from one of Nathan’s landscape retreats, please visit his website and submit a nomination. There is no charge to the patient as the landscaping is supported through Nathan’s fundraising efforts and from corporate and personal donations and partnerships. You can also donate through his website here.

“My ultimate goal is to encourage more people to go out and find ways to help support quality of life for those who are going through cancer. There are so many ways people can help others in their communities.”

Have you found water and nature to be helpful in your cancer journey? Please share your story.