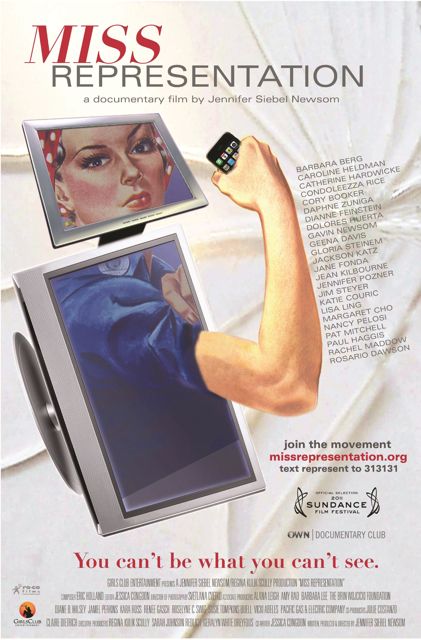 Miss Representation-How the Media is Distorting Our View of Women as Leaders, and How It's Impacting You!

A couple weekends ago a girlfriend and I got together to watch the documentary called “Miss Representation.” I’m telling you, whether you’re a man or a woman, you need to watch this film. It premiered at the Sundance Film Festival earlier this year, and it’s been causing a movement ever since.

This film impacted me so much. It opened my eyes to how much pressure I’ve been putting on myself to meet unrealistic expectations. This movie goes to the root of why so many women feel like they can’t reach the standard society and the media have set for us-a perfection that does not exist!

What the Movie is About

Written and directed by filmmaker, speaker, and former actress Jennifer Siebel Newsom, Miss Representation premiered at the 2011 Sundance Film Festival, and also aired on the Oprah Winfrey Network (OWN). The movie weaves stories from teenage girls with interviews from powerful women in today’s society including Dr. Condoleezza Rice, Lisa Ling, Nancy Pelosi, Katie Couric, Rosario Dawson, and more. The point is to look at the messages today’s media, culture, and education are sending to our young women-mainly, that their primary value depends on their youth, beauty, and sexuality, rather than on their intelligence, individual gifts, and leadership abilities.

The film explores how the media’s misrepresentations of women have led to the underrepresentation of women in positions of power and influence. “While women have made great strides in leadership over the past few decades,” the website states, “the United States is still 90th in the world for women in national legislatures, women hold only 3% of clout positions in mainstream media, and 65% of women and girls have disordered eating behaviors.”

The film has won numerous awards already, including the Special Selection at the 2011 Sundance Film Festival, as well as the 2011 Newport Beach Film Festival and the New Zealand Film Festival.

A Few Words from the Director

In a Huffington Post article, Jennifer Siebel Newsom answered some questions about the film. In one of her answers, she talks about the difficulties women have succeeding.

“One of the things Gloria [Steinem] says that I love is, ‘We women need to not be so nice.’ And it’s not meaning be a bitch. It’s more that we need to say, ‘This is not right, this is unjust, we deserve better….’ It’s complex but it’s also sort of obvious to see what the media does-it’s like let’s trivialize women, let’s sexualize them. And therefore, let’s not take them seriously. And I think we women need to not buy into that. We have tremendous powers as consumers; we are 86% of consumers, so if we say we aren’t going to buy into that we really don’t have to.”

She’s goes on to comment on our current culture: “I think it requires courage to find a better way. When youth are engaging in cutting and other forms of self-injury, when 65% of American women have eating disorders, when depression rates have doubled in the past ten years, when plastic surgery has tripled in the past decade amongst youth in particular; when you look at that you think, ‘Something is wrong. This is not healthy.'”

My Experience with Body Image

After I watched this movie, I felt it gave me permission to not be so obsessed with what society is asking of women today. We’re trying to attain this image that the media is showing us and it’s really unhealthy, unrealistic, and is causing us significant stress while we strive to get there. I was shocked to find out that over half of 13-year old girls are unhappy with their bodies, and that 65 percent of women have an eating disorder.

I can relate, because I went through an eating disorder myself. When I had Hodgkin’s disease at the age of 16, the treatments made me gain weight. I also lost my hair, got super dry skin, and my face swelled up because of the steroids. I went from the girl with the slender figure and long hair who was getting a lot of attention from the boys to being the girl with cancer who looked puffy and bald. Suddenly the boys were ignoring me-the same ones that before were paying so much attention to me. I felt confused and devalued, and wondered if my looks were all that mattered?

Like any teenage girl, I wanted that attention back, so once the cancer treatments were over, I stopped eating. It was the one thing I could do to regain control of my body. Unfortunately, it went too far, and I went down to skin and bones. For years, I struggled with the disorder and my body image. Now I realize that I am so not alone in this, and it makes me very sad.

Today’s focus on women’s bodies and sexuality is completely disempowering, and this movie is right-it distracts women from focusing on their skills, intelligence, leadership, and their ability to make a difference in our world. How long is it going to take for someone to take a stand?

Have you seen Miss Representation? I want to know your thoughts. Please write in!