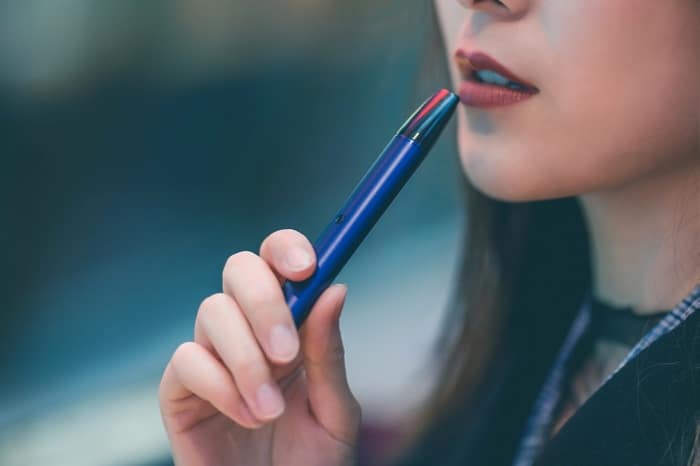 Is Vaping Better for Your Skin than Traditional Smoking?

Smoking regular cigarettes is terrible for your skin.

Tobacco smoke creates volatile free radicals that damage elastic fibers, leading to wrinkles and premature aging. It narrows the blood vessels, reducing blood supply to the skin, and degrades collagen, attacking the structure of the skin and leading to sagging and bagging.

So smoking is bad for your skin and your appearance. You probably already knew that. But is vaping any better?

E-cigarettes Not as Harmless As We Were Told

When electronic cigarettes (e-cigarettes) came onto the market, most manufacturers advertised them as being safer than regular cigarettes. E-cigarettes contain no tobacco, which means they don’t expose you to all the dangerous chemicals that tobacco contains.

A vaping solution, instead, typically contains nicotine and several other chemicals that when subjected to heat from the vaping device, produce a vapor the user inhales to get the effects of the nicotine.

Advertisers claimed this method of smoking was much safer than traditional smoking, but recent studies have cast doubt on that assumption. In 2018, the National Academies of Science, Engineering and Medicine reviewed over 800 studies and released a consensus report showing:

The more we learn, the more we realize that e-cigarettes are not as harmless as manufacturers would have us believe.

Perhaps the most glaring skin problems associated with vaping are burns. Between 2015 and 2017, an estimated 2,035 people with electronic cigarette burn injuries were treated in U.S. emergency rooms.

E-cigarettes, because they operate on lithium-ion batteries, are known to sometimes malfunction and overheat or explode, potentially causing significant burns that can leave lasting scars.

This creates a whole list of skin problems, including the following:

With regular vaping, the skin barrier breaks down, making the skin more sensitive, prone to infections, and inflamed. This can lead to unwanted pigmentation, redness, and loss of collagen and elastin, which leads to the formation of wrinkles and sagging.

We already know that nicotine breaks down collagen and elastin, so in that way, e-cigarettes are no better than traditional ones, as both types contain nicotine. Nicotine is also known to:

In addition to causing problems like wrinkles, sagging, and redness, vaping can also make any skin conditions you already have worse. When the vapor comes into contact with your skin (which it does when you use the device), it can aggravate dry skin by making it patchy or itchy, while the chemicals in the vapor increase skin sensitivity and irritation, leading to rashes.

Inhaling the toxins will weaken the skin’s barrier and increase inflammation, as well. That means if you’re already struggling with acne, rosacea, and psoriasis, you can expect these conditions will deteriorate if you choose to use e-cigarettes.

In a 2019 study on e-cigarettes, researchers found that those who vaped were more likely to suffer from contact dermatitis, a type of allergic skin condition.

E-cigarettes have been on the market for only about a decade, so the research is in its infancy. From what we’ve discovered so far, we can clearly say that vaping is damaging to the skin, and will likely lead to accelerated aging, sensitive skin, inflammation, and allergic reactions.

Did you think that vaping was harmless to the skin?

Photo by Thorn Yang from Pexels