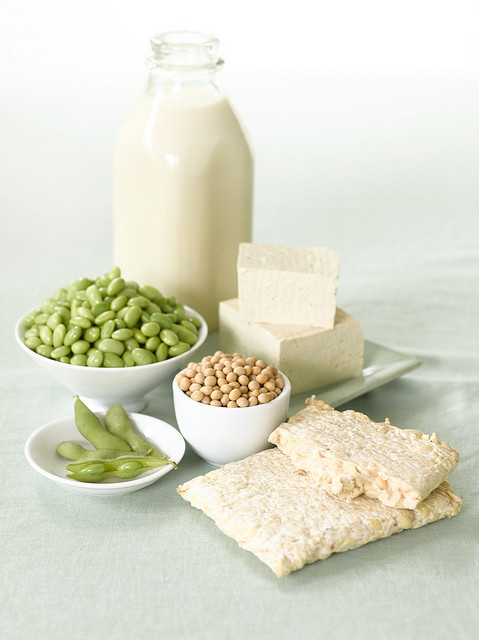 Is Soy-as Food or in Personal Care Products-Safe if I’m Going Through Cancer?

A lot of Cinco Vidas readers have asked me about soy. Is it a hormone disruptor? Is it linked to breast cancer? Should people with cancer avoid soy? What if soy is an ingredient in a skincare product? Is it estrogenic?

I’m not surprised people are asking questions about this, because the whole issue of soy is really confusing right now. To bring you some answers, I’ve consulted with doctors and researched countless studies. Here’s what I’ve gleaned so far.

Soy contains an abundance of “phytoestrogens,” or natural plant compounds that can behave as weak estrogens in both animals and humans. Their role in the plant is to protect it from stress and serve as part of the defense system, so naturally many scientists (and nutritionists) believed that soy could help protect human bodies as well.

Here’s a taste of the confusion. Early studies suggested that soy may help lower LDL cholesterol levels, thereby reducing the risk of heart disease. Later studies, however, have found no such affect on cholesterol. Some studies suggested soy could help you lose weight, but others showed it didn’t help much. Some studies found soy could help control insulin levels, but others disputed those results as well. A few years ago soy was all the rage to help reduce menopausal symptoms, but more recent studies have question whether it does any good. Related studies thought that soy could help reduce the amount of bone loss, but later studies seem to have debunked that theory, too.

When we look at cancer, we find no more clarity. A recent study from October 2010 reported that women past menopause who have had cancer could reduce their risk of recurrence with a higher intake of soy. Researchers warned, however, that the study was small and included only women with breast cancer who were receiving care in China. Other studies seem to confirm this protective effect against not only breast cancer, but colon and prostate cancer. Some animal studies, however, have found that phytoestrogens may negatively affect breast cells, actually increasing the risk of tumors. Lab studies have also shown that various mixtures of phytoestrogens stimulated breast cancer cell growth in humans.

Overall, it looks like what science has found so far is that phytoestrogens like those found in soy can be both preventive and promoting when it comes to cancer, and that it depends on the dose, the timing of the exposure, and the type of phytoestrogen-and, whether or not the cancer is estrogen dependent. Clear as mud, right?

Until science can tell us more, what do we do? We have to consider several things. First of all, our exposure to environmental estrogens has increased a lot over the past 20 years. It’s not like we need to consume more! Second, soy is a good source of fiber, B vitamins, omega-3 fatty acids, and protein-but human studies are showing conflicting results as to the effects of phytoestrogens on human health.

“What I’ve been telling my patients right now,” says Dr. Richard Lee, medical director of the Integrative Medicine Program at MD Anderson Cancer Center, “is that soy as part of a healthy balanced diet is safe. But I would avoid trying to eat a totally soy-based diet or taking a soy supplement.”

Reviewing all this, here’s my take: If you’re concerned about estrogen-driven breast cancer (which can include breast, ovarian, uterine, cervix, endometrial, and prostate cancer), stay away from soy and other phytoestrogens, particularly in supplements. Enjoying a few soybeans now and then will probably benefit your health, but remember that soy is in a lot of products that we don’t think about, like soy milk, soy sauce, miso, tempeh, and tofu. It’s also often added to foods like breads, cereals, and meats, and used as a meat substitute in vegetarian products (read labels). Particularly if you have breast cancer (or other estrogen-driven cancers) in your family, you may want to limit your exposure to soy until we find out more.

You may want to be cautious, as well, with any personal care products that contain soy. Most contain such small amounts as to be of little concern, but remember that the skin can absorb what’s put on it, especially if we’re talking about lotions and creams and things you don’t rinse off. Soy provides antioxidant and anti-inflammatory effects and can help fortify skin, but again, my advice would be that if you’re avoiding soy on the whole, stay away from products that list soy in the first 10 ingredients or so.

Finally, if you’re trying to get pregnant or if you are pregnant, you may want to cut back on your soy intake. Studies have found that soy phytoestrogens may reduce the odds of a successful pregnancy. The National Institutes of Health are also currently conducting studies to evaluate the long-term effect of soy infant formula on the development of children.

What do you think about the whole soy confusion? Please share your thoughts.