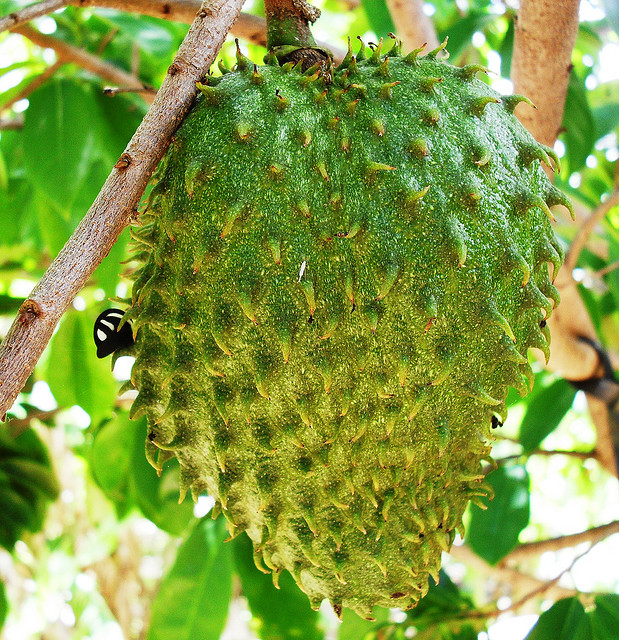 Is Guanabana Juice, or Graviola Extract, Really Better than Chemotherapy? 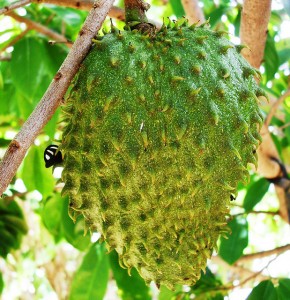 Have you heard the latest cancer-cure buzz? This time it surrounds a tropical fruit produced by a small evergreen tree. Grown in the Amazon jungle and some of the Caribbean islands, the “guanabana,” or “graviola” as it’s known in Portuguese, or even “Paw Paw” as the native South Americans refer to it, produces a green fruit with soft spines, sort of like a spiny avocado only full of fruity goodness. According to a few scattered scientific studies, this tree and its fruit have anti-cancer properties. But does that mean it’s safe to use if you’re fighting cancer?

Graviola fruit-sometimes called “soursop”-apparently tastes like a combination of other citrus fruits with the creamy flavor of banana or coconut. Since it’s rather difficult to eat by itself, the pulp is often used to prepare juice, ice cream, sorbets, and candies. Rich in carbohydates, B and C vitamins, calcium, and fiber, it’s believed to have antibacterial and anti-fungal properties which help in fighting infections. Other parts of the tree, as well, including the bark, leaves, and roots have been used for centuries by natives as natural remedies for infections, fever, digestive problems, and high blood pressure.

But could this little plant really be more effective than chemotherapy? According to “Graviola.com,” this green wonder is a “miraculous natural cancer cell killer 10,000 times stronger than chemo,” particularly, one particular chemo drug called Adriamycin. The site goes on to say that components of graviola attack various types of cancer cells including colon, breast, prostate, lung, and pancreatic, and do so without nausea, weight loss and hair loss. Meanwhile, graviola supposedly protects the immune system, boosts energy, and protects healthy cells. Could all this be true?

Researching this plant was a little difficult, as there is already so much hype surrounding it. I think, however, that I managed to narrow it down, and what I found is the same thing I find with so many of these “natural cancer cures.” Yes, there have been a few small laboratory (test-tube) studies that have shown graviola to have anti-cancer properties, but this isn’t all that unusual on its own. Several plants and fruits have shown cancer-fighting properties in the lab. The thing that seems to be creating the buzz around this fruit is that “10,000 times stronger” claim.

Apparently the National Cancer Institute did a study on graviola way back in 1976, but I couldn’t find this study. Word is it was never released to the public. The Health Sciences Institute (HIS), an independent organization in Maryland, says a study in the Journal of Natural Products found that one chemical from the plant killed colon cancer cells. I couldn’t find this particular study, but I did find others published in the same journal, including a 2010 study that showed anti-cancer activity in vitro, and a 2008 study that showed graviola extract is a potent anti-viral, anti-tumor, and anti-microbial product. One 1998 study (in a different journal) even found anti-depressant effects from the plant.

Still, we’re talking here about a handful of studies, all of them in vitro­-in a test tube. The FDA has so far approved graviola only for use to support immune function. According to canceractive.com, the National Cancer Institute is supporting new research, but in the meantime, I say approach this new “cure” with caution. We have yet to see how it works in clinical trials. We also don’t know what the effects may be of taking graviola for a long time. The Sloan Kettering Cancer Center, for example, warns that graviola “may cause movement disorders and myeloneuropathy with symptoms similar to Parkinson’s disease.” Discovery Health warns that if taken for a prolonged period, graviola may deplete the friendly bacteria required for healthy digestion. Health guru Andrew Weil warns that the in vitro tests are “…a long way from clinical trials to determine the safety and efficacy of these compounds in people with cancer.” He goes on to say that there’s “…no way to tell whether commercially available graviola contains any of the compounds studied….” and recommends that people do not take graviola or its extracts as a dietary supplement.

Even if you were to ignore all these concerns, there are other questions: What is the best dosage? How often should you take it and for how long? What about other health risks?

There’s no doubt that early studies on this plant are very exciting. Until we know more, however, please be really careful. If you do decide to try it, buy from a reputable manufacturer, monitor yourself carefully, and use an easily digestible form like a tincture.

Have you had questions about graviola? Have you talked to a healthcare professional or herbalist about it? Please share your story.