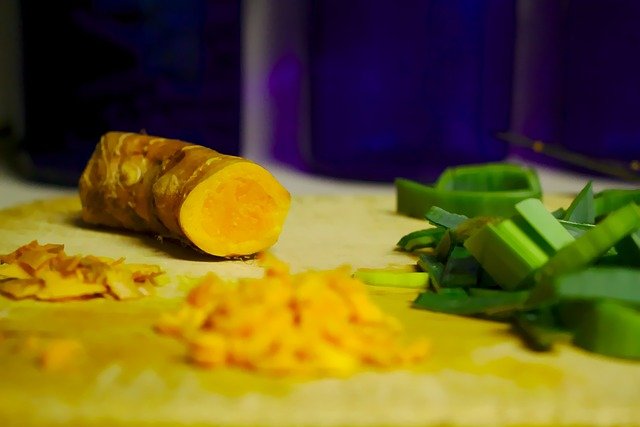 How to Gain Amazing Skin Benefits from Turmeric

It looks a little like a sweet potato. Until a few years ago, its biggest claim to fame was as the strong spice in curry.

But over the past decade, we’ve learned a lot more about turmeric and how it’s not only good for our health, but for our skin, too!

We were so impressed by this humble ingredient that we made it part of our Tri-Rescue Complex, a proprietary blend of turmeric, alpha-bisabolol and reishi mushroom that offers a powerful combination of anti-inflammatory, wound-healing and skin-repairing constituents.

It’s time we shared our enthusiasm for this little tuber grown in India. What’s the big deal about turmeric anyway? Read on!

Turmeric is similar to a sweet potato, as it is a tuber root that comes from the Curcuma longa plant, a perennial belonging to the ginger family. It’s native to South Asia and some Pacific Islands, and is first of all a food, nutritious either raw or cooked. The dried powder is used as the popular base for curry, which is an Indian dish made of meat and vegetables and cooked in a strong sauce.

Because of its color, the people in India and China also used turmeric in textile dyes, which is why it was also called “Indian saffron.” For thousands of years, though, natives were aware of its powerful health benefits, and used it to help improve digestion, calm coughs and other respiratory ailments, relieve joint pain, and soothe skin problems like burns, cuts, and insect bites.

More recent research has discovered that turmeric may be very useful to us as a medicinal product. Both turmeric and an extract of one of its main components, called “curcumin,” are now available in supplement form. Studies have shown they may help reduce inflammation-by as much as anti-inflammatory drugs in many cases-boost antioxidant protection, slow the growth of cancer cells, and perhaps even protect the brain from changes that can lead to Alzheimer’s.

Recent studies have also shown turmeric to be very beneficial to the skin.

Here are just a few of the ways that turmeric can protect, soothe, and promote the health of skin.

Sun exposure increases our risk of cancer and of premature aging. Turmeric can help protect the skin from the damage that UV rays can cause. According to a 2009 study, it helped to reduce UV-damage, while preventing the formation of wrinkles and age spots. A later study also reported that when applied topically for six weeks, a turmeric cream improved the skin’s ability to resist sun damage and hold onto its own moisture. The researchers actually stated that incorporating the extract into sunscreen formulas might be a good idea.

2. Soothe psoriasis and other inflammatory flare-ups.

If you have psoriasis, dermatitis, rosacea, or other signs of inflammation on your skin, you owe it to yourself to find products that contain turmeric. The ingredient has natural but powerful anti-inflammatory properties. An extract of curcumin was found in a study to help inhibit the activity of a protein associated with psoriasis, helping to reduce symptoms. Other studies have also found that taking a curcumin supplement helped reduce the symptoms of psoriasis by up to half.

It can be difficult sometimes to determine what sort of lotion or cream you should use on a wound like an insect bite, scratch, or small infected area. Find something with turmeric, as it will help that wound to heal.

In one 2005 study, for instance, researchers found that turmeric paste helped wounds to heal faster, while other studies have shown that it helps wounds to close more quickly. It can help boost collagen production, helping skin to rebuild and repair. It’s also been found to be effective on burns-just as effective as silver sufadiazine, one of the standard drugs used on burns.

Hyperpigmentation plagues a lot of us as we age. It may be caused by sun damage, old scars, melasma, or other forms of discoloration, and it’s often really stubborn when you try to get rid of it.

Turmeric may help in your efforts. It seems to affect “melanin,” the substance in skin that creates pigmentation. When you have dark areas, you have more melanin in those areas. Curcumin has been found to block the activation of proteins in the skin that regulate melanin production. Researchers found in one study that it did double duty-protecting from UV rays and preventing the dark spots that UV rays can cause.

Even when compared to hydroquinone, a common bleaching ingredient (that can be harsh on skin but is effective at fading dark spots), curcumin cream was found to be just as effective without causing the side effects that hydroquinone can cause.

If you struggle with acne, turmeric is an ingredient you want to look for in your skin care. It has the natural ability to control the over-production of sebum (skin oil) that is often seen in people with acne, thereby robbing acne of what it needs to thrive.

Researchers found that when they compared a turmeric cream with placebo cream in participants with acne, those that used the turmeric cream reduced the amount of sebum in their skin by 25 percent after 10 weeks.

We’re all looking for natural ingredients to help fight the appearance of aging on the skin. Turns out turmeric may do that, too.

In addition to protecting from sun damage, turmeric is also a powerful antioxidant, which means that it can defend the skin from free-radical damage-something we all need to do if we want to keep skin looking youthful. It also helps to reduce inflammation, and inflammation is a key factor in skin aging.

But turmeric goes beyond even these actions to actually help fade the appearance of fine lines and wrinkles. Researchers compared two creams-both with niacinamide (a vitamin-B based anti-aging ingredient), but only one with turmeric. They found that after eight weeks of application in women aged 40 to 60, the turmeric cream helped reduce fine lines and wrinkles by 15 percent more than the cream without turmeric.

How to Give Your Skin the Benefits of Turmeric

If you’re wondering by now how you can get this ingredient for yourself, look no farther than our CV Skinlabs shop! Every one of our products contains the Tri-Rescue Complex, which is rich in turmeric. That means every time you use any of our products, you’re giving your skin a little turmeric, too.

You can also consider taking turmeric supplements, but always check with your doctor first. Turmeric has the ability to affect blood clotting, so if you’re already taking medication for high blood pressure or heart disease, it may not be the right choice for you.

You can also make your own facial masks at home using turmeric powder and other ingredients like lemon juice, honey, yogurt, avocados, eggs, and milk. Have fun, and see if your skin doesn’t look better than ever!

Do you have a favorite turmeric mask recipe?