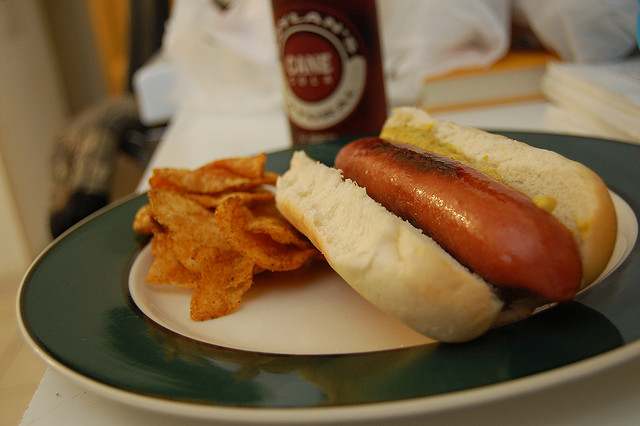 Foods to Limit or Avoid: 6 That May Contain Carcinogens

With all the talk about the bad-for-you ingredients in foods, you may be wondering what’s just iffy (like that donut in the morning) and what’s really bad. Are there any foods that could be setting you up for disease in the future?

Though science can’t yet tell us if eating hot dogs increases the risk for cancer, for example, they can tell us that some ingredients in hot dogs may be carcinogenic. Here are my top ten foods to stay away from for that reason alone.

1.  Potato chips and French fries. According to the National Cancer Institute, acrylamide is a chemical used for industrial purposes that is found in many foods, with particularly high levels in some potato chips, French fries, and other foods cooked at high temperatures. (Baking, roasting, and frying can all produce acrylamide.) Based on animal studies, acrylamide is considered a probable human carcinogen. Though the Environmental Protection Agency regulates levels of acrylamide in drinking water, there are currently no guidelines on acrylamide in food itself. Boiled potatoes have been found to be free of acrylamide.

2.  Hot dogs and deli meats. Many of these contain nitrites as preservatives, which during the cooking process, can form carcinogenic N-nitroso compounds. These compounds have been associated with several different cancers. One study published in Cancer Causes & Control, for example, found that children eating more than 12 hot dogs a month had nine times the normal risk of developing childhood leukemia. Any cured meat may contain nitrites, including lunch meats, bacon, ham, and even cured fish. And so far, “organic” and “natural” hot dogs aren’t much better-an article in The New York Times noted they often contain nitrites, too.

3.  Canned foods. Cans used to store foods are often coated in a type of plastic that’s made with bisphenol-A (BPA), a chemical that’s been linked to breast cancer and prostate cancer because of its hormone-altering capabilities. Though not labeled a carcinogen on its own, evidence suggests that it increases cancer susceptibility through changes to DNA. A recent study found that people who ate canned soup for five days straight saw their urinary levels of BPA spike 1,200 percent compared to those who ate fresh soup. Buy foods in boxes, jars, and BPA-free cans.

4.  Chicken and apple juice. Recent studies have found both chicken and apple juice sold in the U.S. can contain small levels of arsenic, which has been linked to skin, lung, and bladder cancer. Some apple juices were found to contain more than the amount deemed safe in drinking water. The good news is that as a result of an FDA study on chicken, the manufacturer of the chicken feed laced with arsenic said it would pull the ingredient off the market. The debate on juice is still ongoing. Carefully research the brands you buy.

5.  Restaurant grilled or pan-fried chicken. A study published in Nutrition and Cancer found that when 100 samples of grilled chicken from seven popular chain restaurants contained PhIP, a known human carcinogen. The restaurants where the samples were obtained included Applebee’s, Burger King, Chick-fil-A, Chili’s, McDonald’s, Outback, and T.G.I. Friday’s-and watch out. Some of the samples tested included the grilled chicken that’s used on salads.

6.  Donuts, rolls, and buns. Most of these are made from white flour, and white flour may contain potassium bromate, a food additive used in the bread-making process that has been found to be carcinogenic in animal studies. The Center for Science in the Public Interest has petitioned the FDA to prohibit the use of potassium bromate, but so far it is not restricted in the U.S. Donuts are also full of sugar and trans fats, so either cut them out completely, or eat sparingly. Look for “potassium bromate” or “bromated flour” on the ingredient label. Brands like Orowheat, Entenmann’s, Pepperidge Farm, and Pillsbury have switched to bromate-free processes. Supermarket chains like Giant, Jewel, Ralph’s, and Von’s also do not use bromate.

Do you have tips for avoiding carcinogens in food? Please share!