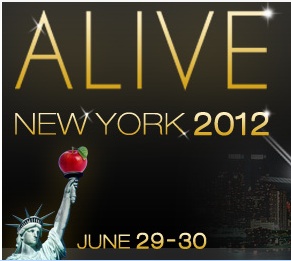 Anna Scurry used to spend her days suffering from migraine headaches and fibromyalgia, among other things. Now she’s feeling healthier and more energetic than ever, and she’s the co-founder of the ALIVE Foundation. On June 29-30, ALIVE is putting on the first ever “ALIVE New York” conference and celebrity awards show right here in New York City.

I am so honored to have partnered with ALIVE New York to be part of this amazing conference. If you care about your health, believe in holistic living, and want to keep yourself free of modern-day diseases and ailments, you want to be there! Trust me. The buzz is building quickly and event is expected to sell out in a few weeks.

What is Alive New York?
This two-day health and wellness conference will take place in the stately town hall in Times Square. On the main stage, presented in Broadway style, renowned alternative doctors, world champion athletes, visionaries, and other inspiring human beings will share their stories, experiences, studies, and information about natural health and wellness, helping you learn how to live a balanced and alive lifestyle free from sickness and disease. I will also be doing a book signing there for When Cancer Hits.

“This conference will give attendees the truth,” Anna says, “about all aspects of holistic health. Attendees will learn what their doctors don’t tell them-insider health secrets about how to take responsibility for their own health and wellness. Instead of being told to take a pill, they’ll learn how to focus on their diet, pH balance, lifestyle choices, and alternative treatments in order to empower themselves to create a life of abundance and joy.”

Red-Carpet Awards Show
After the two days of live presentations, the stage will be cleared and prepared for a black-tie awards show to take place on the evening of June 30th. Modeled after Hollywood’s premiere award events, the ALIVE Awards promise to be the “Academy Awards of Health & Humanities,” honoring celebrities, individuals, companies and organizations for their contributions to humanity, and their commitment to leading a healthy lifestyle both physically and environmentally. In addition, they’ll be live performances by top entertainment groups and surprise celebrity appearances.

“Attendees will get the opportunity to dress up, walk the red carpet, have professional photos taken, and enjoy an evening of celebrity entertainment mixed with presentations of awards to top individuals in the health field,” Anna says.

Learning to Live with Reduced Toxins
As co-founder and communications director of the Alive Foundation, Anna can hardly believe she’s come so far from those days when she felt she could barely make it through life.

“I suffered from fibromyalgia, migraines, gallstones, psoriasis, all sorts of health issues,” she says. “I healed myself naturally. It started when my mom told me about this water she was drinking. She was using a new Kangen water machine to filter out the contaminants and harmful chemicals out of her tap water. I just started guzzling it, and within a couple days, I felt better.”

The experience turned Anna on to natural health solutions that, as she puts it, allow the body to heal itself. She began to take more notice the toxins in food, beverages, personal care products, and environment, and started to make changes that would reduce her exposure. “I became a certified nutritionist, I learned about toxicity in skin care, our food, water, air etc, and I committed myself to educating as many people as I could.”

Anna and her husband Joshua founded the ALIVE Foundation just a year ago to raise awareness of the body’s self-healing abilities. She had no idea it would grow so quickly. “We never expected it to be this big,” she says, “but we got a global response.”

ALIVE has received support from celebrities like Olivia Newton John, 12 Stones, Suzanne Somers, and more, and obtained a huge following on an India press tour that translated into a video that was top-rated on Yahoo. Though Anna thought they would originally create some events that would involve maybe one-hundred people, today they are preparing for a historical event in New York City that promises to be the first of its kind, with proceeds going to charities that provide health-based assistance around the nation.

How You Can Attend
Buy your tickets now for the ALIVE New York event and you’ll pay only $399 for both days and the awards show. (If you don’t live in New York, don’t worry-you can watch the conference in global live stream for only $49.) You have to hurry, though-the price doubles in June. By the way, your ticket price is 100 percent tax deductible.

“This information will be hugely empowering,” Anna says. “You’ll hear personal testimonies of people who have changed their own lives. You’ll get inside expertise from doctors from around the world such as Dr. Stanislaw Burzynski, Dr. Leonard Coldwell, Dr. Robert Young,  Dr. Nicholas Gonzalez and many more. You’ll hear from athletes and other wellness leaders of today covering all sorts of health topics. By the end of the two days, you’ll realize you can be hip and you can be healthy!”

For your tickets and for updates on celebrity appearances at Alive New York, please visit the Alive Foundation website.

Note: ALIVE Foundation is offering four children with cancer-two boys and two girls-and their families the opportunity to attend ALIVE New York completely free of charge. Each child will be treated to a complete VIP weekend with tickets to the event and the ability to meet and greet many of the celebrity presenters. If you have a child with cancer and would like to enter for the drawing, send Anna your story and contact information on the contact form found at the ALIVE New York website.