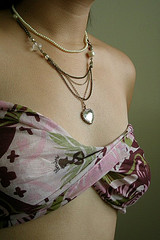 “I have very dense breasts,” says internet responder, Arl1947. “My doctor sent me for a mammogram after he detected a mass in my right breast. The mammogram was followed by an ultrasound because they couldn’t see anything on the film.”

“I don’t understand why they make women who have dense breast tissue go through so many hoops and emotions to find out that they are okay,” says fellow responder MesaMom. “It’s so time consuming, expensive, and emotionally draining.”

It’s something most of us haven’t heard much about, at least compared to other risk factors like smoking, drinking, and weight gain. But according to recent studies, having “dense breasts” may be an independent risk factor for breast cancer. Researchers from Toronto, Canada, for example, found that women who developed breast cancer had, on average, a baseline mammographic density that was 5.8 percentage points greater than the women who had not developed cancer. Then they compared women who had extensive breast density (density in more than 75% of their breast) with women who had only a small amount (less than 10%). Women with the most dense breasts had 4.7 times the odds of being diagnosed with breast cancer less than 12 months after a negative screening test.

This is a significant increase. But don’t panic. “You should not make the mistake in thinking that if you have dense breasts your risk is nearly five times greater,” says Dr. Susan Love. “The average 50-year-old woman has a 2.5 percent risk of developing breast cancer over 10 years. If she has extensive breast density, the risk doubles to five percent.”

What are dense breasts? According to thinkpinker.com, “When women are young, their breasts are made up of the specialized breast tissue that produces milk during lactation. This tissue is very thick, or dense. As women age, the breast tissue changes. Fat replaces the dense milk-producing breast tissue.”

Thicker, denser tissue makes it more difficult to find anything out of the ordinary on a mammogram. It shows up white-the same color as a tumor or cyst. “Dense breasts can make traditional mammograms more difficult to interpret,” says the Mayo Clinic. “Dense breast tissue appears as a solid white area on a mammogram film, and fat appears as a dark area. Mammogram X-rays do not penetrate-or ‘see through’-dense tissues as well as they do fat. Tumors also are dense tissue and appear as solid white areas on the mammograms.”

Scientists don’t know why some women have more dense breasts than others. And most women can’t tell by the feel of the breast-usually only a mammogram can determine the type of tissue. If you’ve been told you have dense breasts, however, you may be wondering: Does a traditional mammogram do any good? Particularly if you, like the women quoted earlier, have suffered multiple mammograms and other tests as your doctors try to determine what’s what.

“Attention should be directed to the development and evaluation of alternative imaging techniques” for women who have dense breast tissue, say the Canadian researchers. The Mayo Clinic agrees, saying that a digital mammogram is somewhat better than film, as images can be enhanced and magnified for closer viewing. Other than that, we’re still waiting for new developments in screening, and meanwhile doctors recommend that any mammogram is better than none.

Meanwhile, you can do things to reduce your risk. A recent study found that overweight postmenopausal women who exercised reduced their breast density. Another point for exercise! Have you started walking yet? And don’t forget-breast density is just one risk factor. You can still lower your overall risk of breast cancer by eating right, maintaining a healthy weight, and avoiding smoking, among other things. In addition, try to find a healthcare provider who uses a digital machine. You may also want to make an appointment at a high-risk clinic. Breast specialists there may have other preventative advice for you.

Have you experienced multiple screenings and tests because of your dense breasts? Please tell us your story.