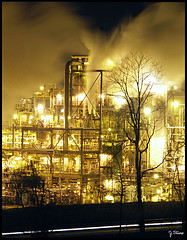 Debate Rages On-Just How Much do Environmental Chemicals Contribute to Cancer?

Earlier this year (2010), the President’s Cancer Panel put out a 240-page report on cancer risks from chemicals and other hazards in the environment. Their overall conclusions? That the government isn’t doing enough to protect us from these chemicals, and our risk of getting cancer from them has been underestimated.

“The true burden of environmentally induced cancers has been grossly underestimated,” says the panel, which advised President Obama to “use the power of your office to remove the carcinogens and other toxins form our food, water, and air that needlessly increase health care costs, cripple our nation’s productivity, and devastate American lives.”

The panel was first created in 1971 to monitor the National Cancer Program, and reports to the President every year. Chemicals they highlighted this year as dangerous include bisphenol A, or BPA (used in plastic bottles and can linings and suspected of causing neural and behavioral effects in young children); radon; formaldehyde, and benzene. They review contaminants from industry, agriculture, air and water, medical imaging and contaminated military sites, and natural hazards like radon gas in homes and arsenic in drinking water. They go on to say that nearly 80,000 chemicals are in use in the United States, and only a few hundred have been tested for safety. The nation’s approach is too much “wait-and-see,” waiting until there is proof the chemicals do harm before taking action to protect the population, the panel says, and they conclude that “At this time, we do not know how much environmental exposures influence cancer risk.”

The American Cancer Society (ACS), however, doesn’t agree with the panel’s advice. After the report came out, they stated that it was unbalanced, and implied that pollution is the major cause of cancer, which is an unproven theory. They estimate only 6 percent of cancers are related to environmental causes, and criticize the panel for implying the risk to be higher. Their fear is that so much attention on environmental causes of cancer may divert attention away from more proven, bigger causes of cancer, like smoking.

“If we could get rid of tobacco,” says Dr. Michael Thun, an epidemiologist from the cancer society, “we could get rid of 30 percent of cancer deaths.” He went on to say that obesity, lack of exercise, and poor nutrition also create more cancer risk than environmental chemicals.

Who’s right? We think both organizations have good points to make. The ACS is right that we must monitor our own health first, as that is the best way to reduce our overall risk of cancer. But we also agree with the panel-that the government isn’t paying enough attention to environmental pollutants, and needs to do more. Whatever controversy the report may create is probably good, in the long run, as it gets more people talking about the health effects of chemicals, which can only lead to a higher awareness and hopefully, to more action to protect public health.

In the meantime, what can you do to lower your risk of chemical exposure? The panel suggests the following:

What are you doing to protect yourself from chemicals? Let us know!